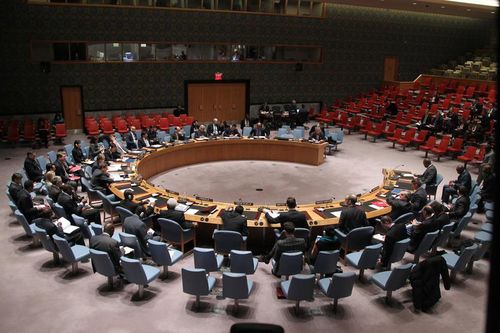 Unanimously adopting two separate resolutions on Libya, the Security Council, in the first, called for an immediate and unconditional ceasefire and extended the United Nations Support Mission there (UNSMIL) until 15 September, and in the second, adjusted the arms embargo on the country in light of the terrorist threat there.

Further to that text, adopted yesterday evening, the Council expressed grave concern about the Islamic State in Iraq and the Levant (ISIL, also referred to by its Arab acronym Da'esh), its supporters and all other individuals, groups, undertakings and entities associated with Al-Qaida and about the negative impact of their presence, violent extremist ideology and actions on stability in Libya.

In a related provision, the 15-member body called on the Sanctions Committee it established in 2011 to consider requests for the transfer or supply of arms and related materiel to the Libyan Government for use by its official Armed Forces to combat ISIL and its supporters.

The Council also expressed support for the United Nations-led political dialogue between the Government of Libya and all Libyan parties that renounced violence, calling on them to engage constructively with the initiative of the Secretary-General's Special Representative and UNSMIL chief, Bernardino Leon, with the purpose of forming a national unity government.

Adopting the resolution by which UNSMIL was extended, the Council decided that the operation's mandate should now focus on support to the Libyan political process and security arrangements. It would include human rights monitoring and reporting, as well as support for securing uncontrolled arms and related materiel and countering its proliferation.

Expressing deep concern at the threat posed by unsecured arms and ammunition in Libya and their proliferation, “which undermines stability in Libya and the region, including through transfer to terrorist and violent extremist groups,” the Council urged the Libyan Government to improve its monitoring of arms and materiel.

Also by that resolution, the Council extended the expert panel on sanctions until 30 April 2016, and parallel to that, the authorizations on illicit oil exports. It reaffirmed that the travel ban and asset freeze, first imposed in 2011, also applied to individuals and entities determined by the Sanctions Committee to be engaging in or providing support for other acts that threatened the peace, stability or security of Libya or obstructed or undermined the successful completion of its political transition.

Condemning the use of violence against civilians and civilian institutions and the continuing escalation of conflict, including attacks on airports, State institutions and other vital national infrastructure and natural assets, the Council called for those responsible to be held accountable.

Listed below are links to weblogs that reference Security Council Adopts Two Resolutions on Libya: