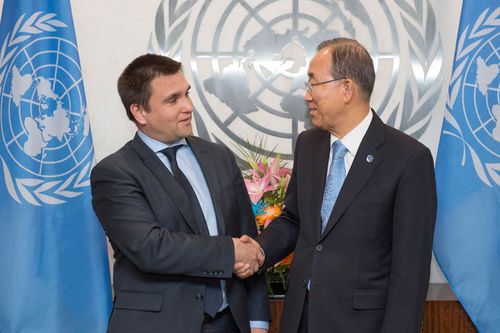 The United Nations Secretary-General met yesterday in New York with the Minister of Foreign Affairs of Ukraine, Pavlo Klimkin, to discuss the conflict in the east of that country.

The two discussed the UN's humanitarian and human rights work in affected areas and they agreed on the need for urgent and full implementation of the 12 February 'Package of Measures for the implementation of the Minsk Agreement,' including a lasting and durable cease-fire and immediate withdrawal of heavy weaponry.

Last week, the Council endorsed the so-called 'Package of Measures' with the unanimous adoption of Resolution 2202 (2015) and called on all parties to the conflict to fully implement the cessation of hostilities, as the UN human rights office expressed concern over reported shelling and trapped civilians in the country's east.

Measures outlined in the text also included the withdrawal of all foreign armed formations, military equipment and mercenaries from the territory of Ukraine under the monitoring of the Organization for Security and Cooperation in Europe (OSCE), as well as the disarmament of all illegal groups.

On the subject of a peacekeeping mission in eastern Ukraine, the Secretary-General noted that the UN would be guided by the Security Council on the matter and reiterated his full support toward a peaceful resolution of the conflict.

Listed below are links to weblogs that reference UN Secretary-General Meets With Ukraine's Foreign Minister: