Best wishes for a happy, healthy and prosperous new year to all our friends celebrating the Chinese New Year 2015 (the year of the goat or sheep).

The International Court of Justice (ICJ) announced that it will hold public hearings in  two cases in April and May 2015.

The first hearing will be held April 14 through May 1 in the combined cases of Certain Activities Carried Out By Nicaragua in the Border Area and Construction of a Road in Costa Rica along the San Juan River between Nicaragua and Costa Rica. More information may be found on the ICJ website.

The second hearing relates to a case brought by the Plurinational State of Bolivia against the Republic of Chile on the Obligation to Negotiate Access to the Pacific Ocean.  The hearings will focus solely on Chile's preliminary objection to the court's jurisdiction.  These hearings are scheduled to take place from Monday May 4, 2015 to Friday, May 8, 2015.  Click here for more information about the case and about how to attend the hearing.

US Requests Consultations with China at WTO Over Alleged Export Subsidies

The request for consultations initiates the formal dispute resolution process at the WTO.  If the parties cannot negotiate a mutually satisfactory resolution of the matter within sixty days, the United States will have the right to request the establishment of a dispute resolution panel.

The dispute is assigned case no. WT/DS489/1.  More information may be found on the WTO website. 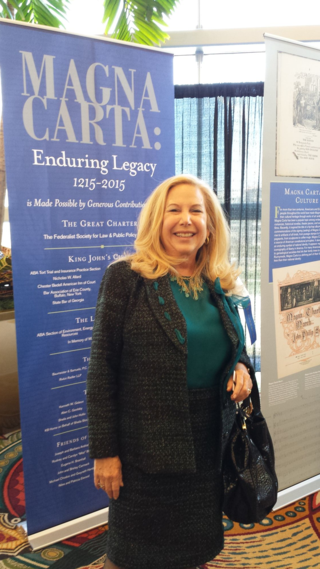 The American Bar Association Standing Committee on the Law Library of Congress, in cooperation with several other ABA entities, has created a magnificent traveling exhibit on Magna Carta, that most powerful document signed by King John in Runnymeade 800 years ago in 1215.

The Magna Carta has been identified as the source of many fundamental freedoms and principles, including:

The traveling exhibit is great and you will have many opportunities to see it around the country.  Looking at the exhibit here is former ABA President Laurel Bellows, who viewed the exhibit at the ABA Midyear Meeting in Houston. 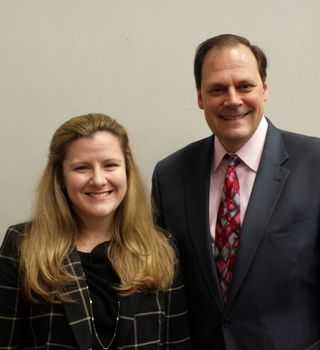 Established in 1832 as a separate department of the Library of Congress, the Law Library of Congress is the largest law library in the world with more than 2.84 million volumes and a global legal research center staffed by foreign law experts who help provide reference assistance by phone, in person, or through the library's oh-so-fantastic "Ask a Librarian" service.

The Law Library of Congress does outreach programs on its collections and how to use them in Washington D.C. and through its website.  The latest presentation was made in Houston at the midyear meeting of the American Bar Association. Senior Legal Reference Specialist Barbara Bavis gave the informative and authoritative presentation on the latest developments, including the Global Legal Research Center, the "Guide to Law Online," the In Custodia Legis Blog, and the new website for Congressional materials Congress.gov which replaced Thomas.

On Friday, the members of the International Court of Justice (ICJ) elected Judge Ronny Abraham of France President of the Court and Judge Abdulqawi Ahmed Yusuf of Somalia Vice President. For more information, see this press release.  The judges' biographies may be found on the ICJ website.

Free Webinar from the Office of the Legal Adviser of the U.S. Department of State

The American Bar Association Section of International Law will present the fifth annual "Live from L" program, a unique opportunity for international lawyers and students of international law to hear directly from the Office of the Legal Adviser of the U.S. Department of State.  The program will be held on Thursday, February 12th, 2015 from 12:00 PM - 1:30 PM US Eastern Standard Time.

The focus of the program will be on "The Role of the Law in the Fight Against ISIL: Use of Force, Sanctions, and Foreign Terrorist Fighters"

You can attend the program in person (free!) at George Washington University Law School or from anywhere by webcast (free!) or by teleconference ($15.00). Click here for registration information.

Yesterday, the International Court of Justice (ICJ) issued its decision in Application of the Convention on the Prevention and Punishment of the Crime of Genocide (Croatia v. Serbia), in which it denied both Croatia's claim and Serbia's counterclaim of genocide committed by the other.

Turning to the merits, the Court held that there is sufficient evidence that Serbia committed physical acts falling within the definition of genocide in Article II of the Convention, i.e., killing members of a group; causing serious bodily and mental harm to members of a group; deliberating inflicting on the group conditions of life intended to bring about its physical destruction in whole or part; and imposing measures intended to prevent births within the group. However, the Court held that the evidence of the mental element, intent to destroy a group in whole or part, was lacking. As a result, the Court rejected Croatia's claim by a vote of 15-2.

This judgment tends to show how difficult it is to prove the necessary elements of a crime, particularly the intent requirement, under international law.

Yesterday, the Inter-American Court of Human Rights received the Ombudsman from Colombia, Jorge Armando Otalora Gomez, who visited the Court to sign a framework cooperation agreement between Colombia and the Inter-American Court.  The Colombian Ombudsman said that actions have recently been taken to strengthen the Ombudsman's office with a view towards improving the observance of human rights in Colombia.  For his part, the President of the Court, Juez Umberto Antonio Sierra Porto, stressed the importance of the Ombudman's office for promoting, protecting and defending human rights in the Americas.  He further stated that this type of agreement symbolizes the creation of a dialogue between national and international institutions regarding their joint work in protecting and promoting human rights.

For more information, see this p

ress release (only in Spanish).

Share
The Global Legal Skills conference, in its 10th year, will be held in Chicago, the city of its origin. The Conference began in Chicago at The John Marshall Law School, where it was held three times. It has also traveled to Mexico (twice), to Costa Rica (twice), to Georgetown University Law Center in Washington, D.C., and most recently to the University of Verona Faculty of Law in Verona, Italy.

This year’s conference (GLS 10) will be held at The John Marshall Law School for the first two days and will be hosted at Northwestern University School of Law for its final day. The two schools are within walking distance and are also served by subway line.  The conference is also co-sponsored this year by the Facultad Libre de Derecho de Monterrey.

This message invites proposals for presentations. Proposals should be for a 25-minute presentation (for one or two people) or an interactive group panel presentation (no more than four panelists) of 75-minutes (including audience participation).

The conference audience will include legal writing professionals, international and comparative law professors, clinical professors and others involved in skills education, law school administrators, law librarians, and ESL/EFL professors and scholars. Also attending will be faculty members teaching general law subjects with a transnational or international component. Attendees have also included judges, lawyers, court translators, and others involved in international and transnational law. Attendees come from around the world, and as many as 35 countries have been represented in past conferences.

Please submit a proposal on any aspect of Global Legal Skills, including experiential learning, distance education, comparative law, international law, course design and materials, teaching methods, and opportunities for teaching abroad and in the United States. However, because the conference focuses on legal skills for a global audience, please tailor your proposal accordingly.

The schedule for GLS 10 will allow for professional networking opportunities and development and also a chance to take in the many sites (and excellent restaurants!) Chicago has to offer. Chicago is served by two airports, O’Hare and Midway, making travel to the city easy. The timing of the conference (the week before Memorial Day weekend) is intended to allow you to spend extra time exploring Chicago and its environs at a time when the temperatures are moderate and the skies are clear.

This is a self-funded academic conference, and as in past years, presenters will be asked to pay the registration fee of $225.00. A small number of need-based scholarships will also be available, especially for participants from outside the United States. Additional tickets for family members and friends will also be available for the walking tour, law school reception, and Union League Club Gala Dinner. Chicago in the springtime is a great travel destination for families where they can enjoy Millennium Park, two world class zoos, and the amazing Museum Campus.

You may submit more than one proposal but because of high demand for speaking slots you will only be allowed to speak on one panel.

Please send program proposals to GLS10Chicago@gmail.com. You can also send a copy to Lurene Contento (Program Chair of GLS 10). Her email is 9Content@jmls.edu.

The first deadline for submitting a proposal is February 12, 2015. If you submit your proposal by this date, the program committee will notify presenters of acceptance no later than March 6, so that you can make appropriate travel and hotel arrangements. You will find travel information and more conference information on our website, glsc.jmls.edu/2015. Additional proposals will be accepted through April 15 if additional speaking slots are available.

A one-day scholars’ forum is also planned for May 19th, the day before the GLS conference begins. Participation in this forum will be limited to 16 persons and will include special sessions on international legal research as well as the presentation of papers and works-in-progress. For more information about the Scholars’ Forum, send an email to Prof. Mark E. Wojcik at mwojcik@jmls.edu with the title of your proposed work. Registration for the scholars’ forum is at this link: http://events.jmls.edu/registration/node/677

We hope to see you in Chicago this May for the 10th anniversary of the Global Legal Skills Conference!

Authors are invited to address questions and issues arising from the specific area of law relating to their topic. All types of manuscripts, from socio-legal to legal technical to comparative, will be considered for publication.

The Board of Editors will select articles based on quality of research and writing, diversity and relevance of topic. The novelty of the academic contribution is also an essential requirement.  Utrecht Journal has a word limit of 15,000 words including footnotes. For further information please consult the Journal website.  The deadline for submissions is 30 April 2015.