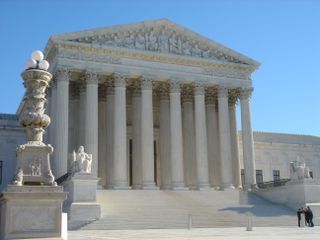 The U.S. Supreme Court this morning granted certiorari in Din v. Kerry, 718 F.2d 856 (9th Cir. 2013), a suit filed against U.S. Secretary of State John Kerry, the U.S. Ambassador to Pakistan, the U.S. Consul General in Islamabad, and the U.S. Ambassador in Afghanistan. A U.S. citizen filed the acction against those government officials alleging that they violated her right to due process by refusing to provide her or her husband (a citizen and resident of Afghanistan) a bona fide reason for denyuing his visa petition.

The district court dismissed the action on the basis of consular non-reviewability. (2010 WL 2560492). By a 2-1 vote, in an opinion by Judge Murguia, the Ninth Circuit reversed and remanded, holding that the government had to do more than to cite a broad section of the Immigration and Nationality Act and that the U.S. citizen had standing to seek a declaratory judgment that her right to due process to limited judicial review of the statute as applied to her violated due process.  Judge Clifton filed a dissenting opinion.

The U.S. Supreme Court granted the petition for certiorari on October 2, 2014. The respondents are represented by Mark Haddad and Heidi Larson Howell of Sidley Austin LLP in Los Angeles.