We are pleased to share with you a guest blog post from Victor Cerda of Chicago, on the situtaiton in Hong Kong. 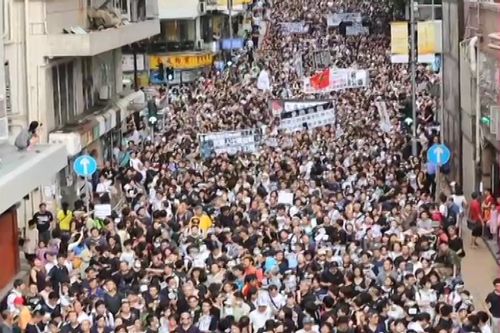 The international community should have its ears perked because the events in Hong Kong have global implications. The demonstrations in Hong Kong are a direct result of what China has labeled “one country, two systems.” In the past, a 1,200 member electorate of Hong Kong voted to elect the Chief Executive, but recent policy changes would allow five million eligible voters in Hong Kong to elect the new leader. The problem arises in that Beijing will choose the eligible candidates and will veto any unfavorable result.

Protesters of this “reformatory” measure challenge the policy as more of the same. They call for true reform where the people elect the leader that best reflects their voice, not the voice of those loyal to Beijing. The protest have lasted seven days while many have been arrested and hospitalized. Counter-protesters have also surfaced dawning blue ribbons as a show of solidarity for law enforcement.

Beijing has issued a deadline for protest to cease by Monday. It has also warned the United States to respect its sovereignty in dealing with internal affairs, and states that it will not tolerate any “illegal acts.” The United States has expressed its desire for universal suffrage for Hong Kong residents, and claims to watch the situation very closely.

Coincidentally, the United States has lifted an armament ban in the south Asian sea claiming that it has concerns with Vietnam’s ability to defend itself from maritime aggression. Of course, Vietnam, a former American foe, is strategically close to Hong Kong. The United States has not revealed what weaponry will arrive in the area, but the move is obviously a statement in light of the Hong Kong situation.

Why does this situation matter?

China is a signatory to the International Covenant for Civil and Political Rights (ICCPR) but has not ratified it. So, although it has an international obligation not to defeat the purpose of the treaty under Article 18 of the Vienna Convention on the Law of Treaties, China is not legally bound to the same standards as Nation States that are parties to the treaty, like the United States or the United Kingdom.

Hong Kong was previously a British colony held under a 99-year lease. Before the United Kingdom returned Hong Kong to China, China had sent assurances to the U.N. Secretary-General that China would apply the ICCPR to the Hong Kong Special Administrative Region.

News reports suggest that China might resort to extreme measure to suppress the protest occurring in Hong Kong. Unfortunately, the international community must consider the next level of progression that this internal conflict can reach, an armed conflict.  I hope that China can reconcile the differences between the protesting parties for the sake of security and stability, even if that means that the United States will lose some influence on China’s next move. More than anything, I hope against all doubt that the “deadline” does not become deadly.

Listed below are links to weblogs that reference Guest Blog Post: The Situation in Hong Kong: