My Name is Bond. Argentina Bond.

There seem to be a total of 461 judgments around the world against Argentina following its default on government bonds that Argentina issued in 2002.  Among other things, there have been lawsuits in New York, Washington DC, France, Ghana, and Italy.  Of particular note for U.S. lawyers in the litigation against Argentina is the U.S. case of NML Capital Ltd v. Republic of Argentina.

Argentina settled with most of the bondholders but a group of holdouts (known as the "vulture funds") refused to settle for anything less than the full value of the bonds (even though the vulture funds purchased the funds at less than full value). In addition to judicial actions, a public relations war has been waged to win over public opinion.

On September 9, 2014, the United Nations General Assembly voted in favor of a legal framework to regulate restructuring of foreign debt. 124 countries voted in favor, but the United States, United Kingdom, Germany, Japan, and Canada opposed it.

On September 26, 2014, the U.N. Human Rights Council approved an Argentine-sponsored resolution that essentially condemned vulture funds as a violation of human rights. The arguments before the Human Rights Council were that when governments were forced to pay on its bonds it would then have no money for other things such as education or hospitals or roads.  The text of the United Nations Human Rights Council Resolution can be viewed at A/HRC/27/L.26 (Sept. 23, 2014).

On October 8, 2014, the International Monetary Fund recommended that modifications should be able to be made to the "pari pasu" clause to exclude the duty to make ratable payments. And Argentina has also gotten support from the World Bank as well as banks in Brazil and China. But the litigation continues. 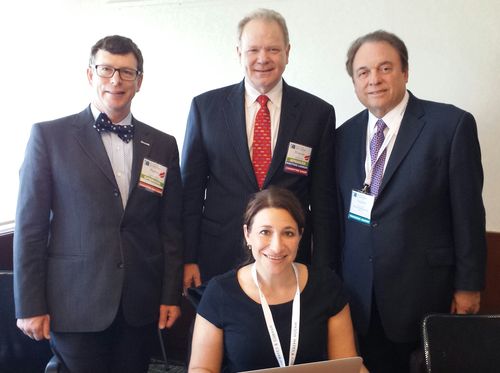 This brief timeline presents only some of the background to the Argentine financial crisis, a topic being explored in several panels at the Fall Meeting of the American Bar Association Section of International Law.

Listed below are links to weblogs that reference My Name is Bond. Argentina Bond.: