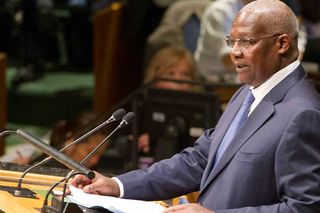 The President of the United Nations General Assembly, Sam Kutesa, opened the 69th Session of the UN General Assembly in New York today with an appeal to member states to seize this "unprecedented historic opportunity" to improve the livelihoods of all people and set them on a path to achieving sustainable development. "The world today is vastly different from what it was in 1945," he said, "but one thing remains constant the need to work together to harness opportunities for prosperity and to find solutions to the global challenges confronting humanity."

His speech comes with less than 470 days left to achieve the eight anti-poverty targets known as the Millennium Development Goals (MDG's). Since 2000, the world reached targets on reducing poverty, increasing access to improved drinking water sources, improving the lives of slum dwellers and achieving gender parity in primary school. Yet the sanitation target lags behind, maternal health is still low, and inequalities within and among countries remain high, and employment levels particularly among youth remain high, Mr. Kutesa said.

The international community is also formulating a post-2015 development agenda which should be "ambitious, transformative and produce tangible benefits and improved livelihoods."

"The new agenda should promote sustained and inclusive economic growth, safeguard the future of our planet, and lead to the achievement of sustainable development," articulated Mr. Kutesa, who will lead the effort to finalize the new agenda in September of next year.

The theme of this year's General Assembly is "Delivering on and Implementing a Transformative Post-2015 Development Agenda."

Mr. Kutesa also noted the importance of recognizing climate change as a dangerous reality that must be urgently addressed. World leaders, as well as representatives of business and civil society, yesterday took part in Secretary-'eneral Ban Ki-moons Climate Summit which drew attention to progress towards a universal and meaningful climate agreement in 2015.

He will convene a high-level event on combatting climate change in June.

The General Assembly will also have a high-level thematic debate on strengthening cooperation between the UN and regional organizations.

Among other topics in his speech, Mr. Kutesa called for revitalisation of the 'eneral Assembly and reform of the Security Council to more effectively reflect the current membership of the UN bodies.

Listed below are links to weblogs that reference UN General Assembly Opens: