Hey, United Nations! Get a Better Acronym for Killer Robots! 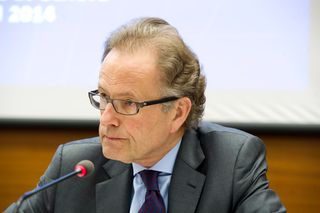 Come on, United Nations. We're lawyers and we talk about laws all the time. We do not need the confusion you're about to create by pushing LAWS as an acronym for killer robots.

Dear blog readers, please help the United Nations (and all of us) by suggesting other ways to describe killer robots (although we happen to like killer robots just fine!). And we hope that Michael Moeller (pictured at right and mentioned in the press release below) can put a stop to this unfortuante acronym before it's too late.

We also note the link to the story below that despite record attendance, NONE of the delegates debating killer robots are women. Go get 'em, our blogger friends at Intlawgrrls!

The top United Nations official in Geneva today urged bold action by diplomats at the start of the world body's first ever meeting on Lethal Autonomous Weapons (LAWS), better known as “killer robots,” telling them: “You have the opportunity to take pre-emptive action and ensure that the ultimate decision to end life remains firmly under human control. The remarks were made by Michael Møller, Acting Director-General of the United Nations Office at Geneva, at the opening session of the Convention on Certain Conventional Weapons (CCW) Meeting of Experts on Lethal Autonomous Weapons Systems taking place this week at the Palais des Nations in Geneva.

The four days of discussions will focus on technological developments, the ethical and sociological questions that arise from the development and deployment of autonomous weapons, as well as the adequacy and legal challenges to international law and the possible impact on military operations, according to the UN Office for Disarmament Affairs (ODA).

The Geneva meeting has attracted record attendance by States, UN organizations, the International Committee of the Red Cross and non-governmental organisations, ODA said.

UN Secretary General Ban Ki-moon took note of “killer robots” in his report on the Protection of Civilians in Armed Conflict issued in November 2013, saying important questions have been raised as to the ability of such systems to operate in accordance with international humanitarian and human rights law. “Is it morally acceptable to delegate decisions about the use of lethal force to such systems? If their use results in a war crime or serious human rights violation, who would be legally responsible? If responsibility cannot be determined as required by international law, is it legal or ethical to deploy such systems,?” he asked. The Secretary-General went on to say: “Although autonomous weapons systems have not yet been deployed and the extent of their development as a military technology remains unclear, discussion of such questions must begin immediately and not once the technology has been developed and proliferated.”

While noting the Meeting of Experts was only a first step towards addressing lethal autonomous weapons, Acting Director-General Møeller urged the delegates gathered in Geneva to take bold action. “All too often international law only responds to atrocities and suffering once it has happened,' Mr. Moeller said and noted that Geneva has had “a historical record that is second to none for achieving results in disarmament and international humanitarian law negotiations."

The outcomes of the Geneva discussions will be submitted to the formal conference of the Convention on Certain Conventional Weapons in November 2014, where States will discuss possible next steps on autonomous weapons. The purpose of the Convention is to ban or restrict the use of specific types of weapons that are considered to cause unnecessary or unjustifiable suffering to combatants or to affect civilians indiscriminately. Currently 117 States are parties to the Convention.

If you are interested in a more substantive engagement with the legal aspects of this debate, you may find the experts' presentations and statements by government representatives, internatioanl organisations and civil society on the website of Reaching Critical Will: http://www.reachingcriticalwill.org/disarmament-fora/others/ccw/2014/statements#legal1 Of particular interest, the statements on legal issues by the International Committee for Robot Arms Control (ICRAC) http://icrac.net/2014/05/icrac-statement-on-legal-issues-to-the-un-ccw-expert-meeting/ http://icrac.net/2014/05/icracs-second-statement-on-legal-issues-to-the-un-ccw-expert-meeting/ See also, this analysis of the dynamics of the debate by Charli Carpenter: http://www.whiteoliphaunt.com/duckofminerva/2014/05/dynamics-of-debate-at-the-experts-meeting-on-autonomous-weapons.html

Listed below are links to weblogs that reference Hey, United Nations! Get a Better Acronym for Killer Robots!:

If you are interested in a more substantive engagement with the legal aspects of this debate, you may find the experts' presentations and statements by government representatives, int'l organisations and civil society on the website of Reaching Critical Will: http://www.reachingcriticalwill.org/disarmament-fora/others/ccw/2014/statements#legal1

Of particular interest, the statements on legal issues by the International Committee for Robot Arms Control (ICRAC)
http://icrac.net/2014/05/icrac-statement-on-legal-issues-to-the-un-ccw-expert-meeting/
http://icrac.net/2014/05/icracs-second-statement-on-legal-issues-to-the-un-ccw-expert-meeting/

See also, this analysis of the dynamics of the debate by Charli Carpenter: http://www.whiteoliphaunt.com/duckofminerva/2014/05/dynamics-of-debate-at-the-experts-meeting-on-autonomous-weapons.html