International Law-Making at the United Nations

The International Law Section, under the leadership of Professor Stephanie Farrior (Vermont) put on a very informative program at the annual meeting of the American Association of Law Schools (AALS) last weekend.  Despite the winter weather, all four invited panelists made their presentations on international law-making at the United Nations (UN).

Mahnoush Arsanjani of the UN's Office of Legal Affairs led off the panel with an overview of UN law-making.  She addressed the somewhat ambiguous legal status of drafts by the International Law Commission and how other expert groups and international tribunals are helping to fill gaps in international law. She also discussed the evolution of UN Security Council Resolutions which originally targeted single states, but which have progressed to addressing issue areas such as terrorism and which tend to have a more legislative aspect to them today.  Finally, she talked about the fact that while the International Court of Justice (ICJ) is not expressly given power to make law in the UN Charter, it's decisions have contributed to the progressive development of international law. 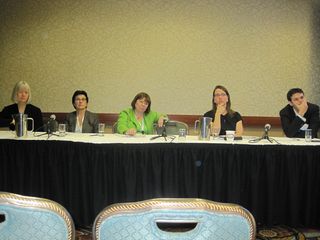 Pablo Castillo-Diaz from UN Women picked up on the idea that the UNSC is addressing issue areas and pointed out  that the UNSC has adopted more resolutions addressing women's issues (7) than it has in any other issue area.  The best known is UNSC Res. 1325 (2000) on women, peace and security.  He raised questions regarding whether the resolutions have been useful and whether a certain level of fatigue had set in.  He suggested that while the resolutions have helped to bring attention to women's issues, there has been a lack of funding and enforcement at times. He concluded that the resolutions have changed the normative landscape and practices at the UN and have resulted in some tangible actions, such as rape prosecutions, increased funding for peacebuilding efforts and more women serving on important commissions at the UN. However, he also pointed out areas where much more work needs to be done.

Kimberly Prost, UN Ombudsperson for the Al Qaeda Sanctions Committee was the third speaker and spoke of the three "T's" where law-making is happening at the UN: Tribunals, Terrorism and Targeted Sanctions.  She pointed to the creation of international criminal tribunals as one example. Some of the tribunals were created by UNSC resolutions that were legislative in character and the resulting judgments of those tribunals have contributed to the development of international criminal law.  She called UNSC Res. 1373 following the terrorist attacks of September 11, 2001 a "remarkable precedent" because the UNSC legislated national law as well as international law by mandating that every Member States create an offense for terrorist financing.  Finally, she described the evolution of targeted sanctions by the UN, which she described as a good concept, but one that initially lacked checks and balances.  Her Ombudsperson office was created to address that deficiency.  She ultimately concluded that much law making at the UN is created during crises and driven by necessity rather than being methodical and well thought out.

Kristen Boon, a law professor from Seton Hall who won a call for papers, was the final speaker on the panel.  She has examined UNSC law-making especially as it relates to the use of sanctions to bolster peace agreements and create new norms.  She also described the evolution of UNSC resolutions, which have become more detailed over time.  She stated that some of the new norms from these resolutions have been adopted into national constitutions as part of the nation-building process (using Liberia as an example).  She suggested that students of international law should understand that UNSC resolutions are unlike statutes in at least three ways - they are often not drafted by lawyers, there is often little legislative history and the final language is often vague as a result of compromises in the negotiation process, which allows states to interpret the language differently.

We were glad to see a good audience turnout for the event despite the weather and the early hour.  We hope to see all of you and more at the International Law program at next year's annual AALS meeting in Washington, DC.

Listed below are links to weblogs that reference International Law-Making at the United Nations :