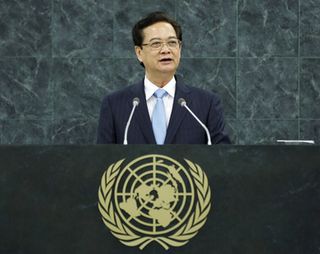 Citing his own country’s example in moving from a war-ravaged, hunger-stricken State to becoming a leading rice exporter, Prime Minister Nguyen Tan Dung of Viet Nam yesterday called on the United Nations to use a "One for All and All for One" strategy in developing a long-term blueprint for sustainable development. “I urge the global community, with a sense of responsibility and humanity, to craft an ambitious post-2015 development agenda and re-double our efforts to promote peace, end hunger, poverty and protect our planet,” he told the General Assembly during its annual General Debate.

The theme of this year’s 68th General Assembly, “The Post 2015 Development Agenda: Setting the Stage!” aims at drawing up an even more ambitious blueprint to totally eliminate poverty and its attendant ills in the decades following the end in 2015 of the current anti-poverty Millennium Development Goals (MDGs) cycle. While acknowledging that the MDGs are currently the world’s most successful endeavour against hunger and poverty, he noted that close to 40 per cent of global wealth is in the hands of not more than 1 per cent of its population, the rich-poor gap continues to widen, over 1 billion people are still living in extreme poverty, and hundreds of millions, especially children, still lack food, basic medicine and education. “Let us develop a roadmap of actions for poorer nations to effectively participate in international agreements, institutions and face and overcome global challenges and dangers in the spirit of (French novelist) Alexander Dumas' (Three) Musketeers "One for All and All for One,” he said.

Turning to his own country’s experience of becoming a leading rice exporter after decades of suffering from hunger, Mr. Nguyen stressed that Viet Nam is now living up to its global obligations and developed countries should do likewise.“We have achieved national food security but consider it our responsibility to help maintain global food security. Not only exporting, we also assist countries to become self-reliant in food production, as we have done in Cuba, Mozambique, Angola, Mali, Madagascar, Myanmar and others. “We hope developed countries and international organizations will participate in supporting similar programs as a meaningful and substantive multi-partite model of cooperation.”

Listed below are links to weblogs that reference Vietnam Urges New Efforts to Promote Peace and Protect the Planet: