Vanuatu Calls for Investigation of Human Rights Abuses in Indonesia 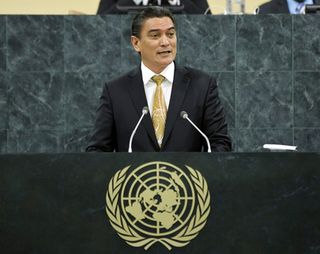 Vanuatu today called on the United Nations to appoint a Special Representative to investigate alleged human rights abuses in the Papuan provinces of Indonesia and their political status, with its Prime minister declaring that the West Papuans have been consistently denied any sort of recognition by the world body.

“We are now deliberating on the issue of Syria, but when it comes to the issue of the rights of the people of West Papua, our voices are muted even in this podium” Prime Minister Moana Carcasses Kalosil told the General Assembly’s annual General Debate, referring to the civil war that has killed some 120,000 Syrians, driver some 6.6 million from their homes and seen the use of chemical weapons.

“How can we then ignore hundreds of thousands of West Papuans who have been brutally beaten and murdered? The people of West Papua are looking to the UN as a beacon for hope… Let us, my colleague leaders, with the same moral conviction yield our support to the plight of West Papuans. It is time for the United Nation to move beyond its periphery and address and rectify some historical error.”

In May UN High Commissioner for Human Rights Navi Pillay voiced concern over a crackdown on mass demonstrations in the Papuan provinces and called on the Indonesian Government to allow peaceful protests and hold accountable those responsible for the violence. “There has not been sufficient transparency in addressing serious human rights violations in Papua,” she said. During the crackdown, Indonesian police reportedly shot and killed two protesters on the eve of the 50th anniversary of the former Dutch New Guinea, occupying the western half of New Guinea Island, becoming part of Indonesia. At least 20 protesters were arrested, many for raising pro-independence flags.

“It is clear from many historical records that the Melanesian people of West Papua were the scapegoat of Cold war politics and were sacrificed to gratify the appetite for the natural resources which this country possess,” Mr. Kalosil said. “Today they are still the victims of ignorance of the UN.”

Listed below are links to weblogs that reference Vanuatu Calls for Investigation of Human Rights Abuses in Indonesia: