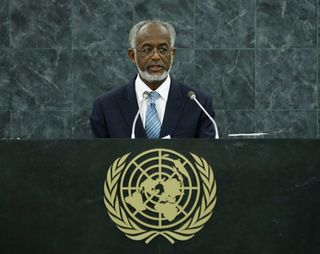 Addressing the United Nations General Assembly, the Foreign Minister of Sudan yesterday urged the international community to do more to support cooperation between his country and South Sudan, and to lift unilateral sanctions that undercutting efforts to achieve sustainable development.

Ali Ahmed Karti opened his address by informing the Assembly that he was deeply disturbed to report that the United States Government denied a visa for President Omar Al-Bashir to attend to proceedings in New York. This action violates the Headquarters agreement, he declared.

He said that President Bashir is known throughout Africa as a man of peace; the man ended a bloody war in Sudan that had been a residual from the days of colonialism. He said that the decision by the United States to deny a visa to the leader of a sovereign nation must be addressed by the international community. “If this is allowed to happen to Sudan, then the same thing can happen to any other member of the United Nations,” he said.

In 2009, President Bashir was indicted by the International Criminal Court for war crimes and crimes against humanity.

Listed below are links to weblogs that reference Sudan Foreign Minister Says that U.S. Denial of Visa to Sudanese President Al-Bashir Violated UN Headquarters Agreement; Al-Bashir Has Been Indicted by the International Criminal Court: