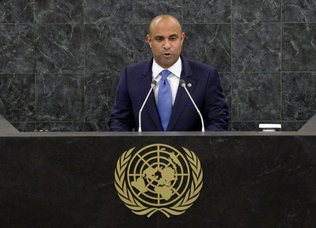 Urging the world to “give Haiti a second look”, because a new country was finally beginning to emerge, Prime Minister Laurent Salvador Lamothe told the United Nations General Assembly yesterday that his nation was slowly but surely becoming a true stakeholder in the international community. “Despite our extremely difficult legacy and countless setbacks, a new Haiti is making progress…on the path of democracy and development,” the Prime Minister said, noting that just three years ago, Haiti was in the midst of recovery from a devastating earthquake. At that time, many social and economic indicators had been in decline, but Mr. Lamothe’s Government moved resolutely and definitively forward, aiming to adopt effective measures that focused on a strategic long-term development.

The development plans underway could not take place without a “root and branch” transformation of public administration, and in that context, his Government is reforming administrative offices, strengthening police forces and bolstering other spheres to not only improve the wider Haitian society but to encourage outside investment.

Mr. Lamothe said that the UN Stabilization Mission in Haiti, known by the French acronym MINUSTAH, will next year to mark its 10th anniversary. In that context, Haiti welcomed the operation’s progressive drawdown, due largely in party to the positive reforms that were taking root in the country. He said that the Government is working hard to consolidate the rule of law and ensure strong and lasting institutions. It is also working to ensure that legislative elections take place as soon as possible.

Mr. Lamothe went on to spotlight the country’s ongoing efforts to improve its education system, as well as to combat poverty and hunger. Haiti invested more than $150 million into social assistance programmes to help the vulnerable. The Government has also defined a national food security policy that set out short-, medium-, and long-term aims, which included increasing national production to reduce national food dependence. “Yet, people are still dying of hunger in Haiti…this situation is intolerable,” he declared, underscoring his Government’s belief that combating extreme poverty is a major priority, as is combating disease, infant mortality and rehabilitating the country’s infrastructure.

He also said that the “very serious: epidemic of cholera appeared in Haiti in October 2010 and is responsible for more than 8,000 deaths and 650,000 infections."  He said: "If we continue to believe that the United Nations has a moral responsibility in this epidemic, it remains true that the UN supports the efforts of the Government and various national and international agencies involved to eradicate this scourge.”

Listed below are links to weblogs that reference Haiti's Prime Minister Reminds United Nations of Responsibility for Cholera Epidemic: