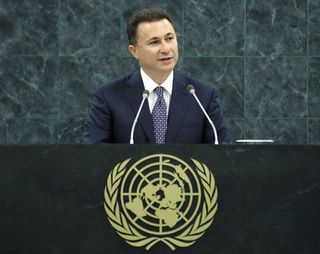 Insisting that the name a country and people choose is “our fundamental individual and collective right,” the Prime Minister of the former Yugoslav Republic of Macedonia, Nikola Gruevski, yesterday called on the United Nations to become more directly involved in the dispute with Greece over his country’s name. “I am convinced that only essential engagement by the international community, above all, that of the UN, will lead to a solution,” he told the General Assembly during its annual General Debate, citing a 2010 decision by the International Court of Justice (ICJ), the UN’s principal judicial organ, that found that Greece, by objecting to his country’s admission to the North Atlantic Treaty Organization (NATO), breached part of the Interim Accord.

That UN-brokered accord, signed in 1995, provided for diplomatic relations between the two countries and addressed related issues, including a Greek obligation not obstruct his nation’s accession to NATO, he said. Greece has also prevented the start of negotiations for his country’s membership in the European Union four years in a row, although it has met the necessary requirements, he added. “If there is not any progress, the UN must not stand still and be satisfied with the status quo, because it would mean showing additional irresponsibility,” Mr. Gruevski said, referring to his country as the “Republic of Macedonia,” although it was admitted to the UN in 1993 under the name of the former Yugoslav Republic of Macedonia.

Greece applies the name Macedonia to its second largest region, which in ancient times was the home of ethnic Greeks, whose most famous member was Alexander the Great.

“The UN should, aware of this already discouraging situation, help with their mechanisms, through the General Assembly, and also the Security Council, on the basis of whose resolution we are talking with our neighbour, to arrive at a solution that will unlock the perspectives of my country,” the prime minister said. “Otherwise, the UN will be faced with failure again and will bear the responsibility because of not reacting in accordance with its own principles and values.”

The Secretary-General’s Personal Envoy on the dispute, Matthew Nimetz, has been holding talks with both sides since 1999 in an effort to resolve the issue.

(Adapted from a UN press release)