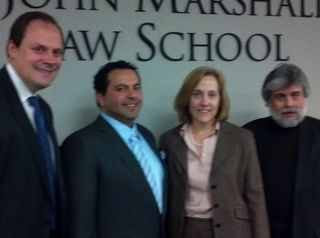 Diane Marie Amann, the Woodruff Chair in International Law at the University of Georgia, spoke today at The John Marshall Law School in Chicago on the topic of international criminal law.  She compared judgements from various criminal trials focusing on the different verdicts, opinions, and evidentiary standards.  The program was well attended, particularly considering that Chicago is being hit right now by a major snow storm.

Listed below are links to weblogs that reference Amann Speaks on International Criminal Law: