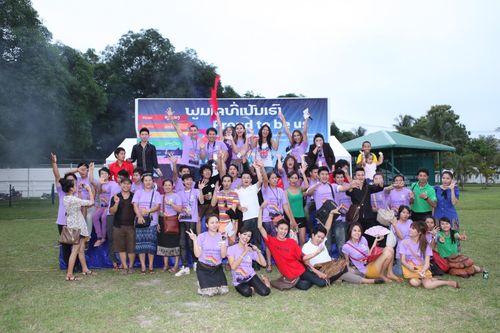 Laos held its first-ever Lesbian, Gay, Bisexual, and Transgender (LGBT) Pride event on June 25 in Vientiane. The event, called "Proud to be Us!", was produced by a group of young Lao LGBT activists and featured music, dance, skits, and dramas exploring issues faced by LGBT people in Laos today, such as discrimination, gender roles, and sexual health.

More than 100 people attended the event, which took place on the sports field of the U.S. Embassy. The guests of honor were U.S. Ambassador Karen Stewart and Dr. Bounpheng Philavong, Director of the Center for HIV/AIDS/STI (CHAS) at the Lao Ministry of Health. During their remarks, both Dr. Bounpheng and Ambassador Stewart congratulated the event organizers for taking an important first step to achieving full acceptance of LGBT people in Lao society. "The message we want to send is that no matter what you look like or where you come from or what your sexual orientation is, every single one of you is a person with value and should be treated with dignity and respect," Ambassador Stewart told the crowd to loud applause.

The event drew performers and participation from a number of organizatons that provide outreach and services to Laos' LGBT community, including the Purple Sky Network, Lao Positive Health Association (Lao PHA), Population Services International (PSI), the Burnet Institute, Family Health International (FHI), the Vientiane Youth Center for Health and Development, and UNFPA. While each of these organizations conducts outreach to certain isolated LGBT groups (i.e. Men who have Sex with Men (MSM) or transgender sex workers), the event marked the first time all had collaborated to stage an activity directed at the broader LGBT community.

Anan Bouapha, a longtime youth leader on HIV/AIDS, sexual reproductive health and youth empowerment issues for the Purple Sky Network and Y-PEER (UNFPA) and one of the key organizers of the "Proud to be Us!" event, called it a huge step forward for LGBT people in Laos."I am proud to call this event our first victory for the LGBT movement in this country. ... We have made history," he said. "I'll remember this memorable day and will meaningfully celebrate it throughout the generations."

(Adapted from a US Embassy Press Release)

Listed below are links to weblogs that reference First Gay Pride Held in Laos: