Photos from the ASIL Annual Meeting 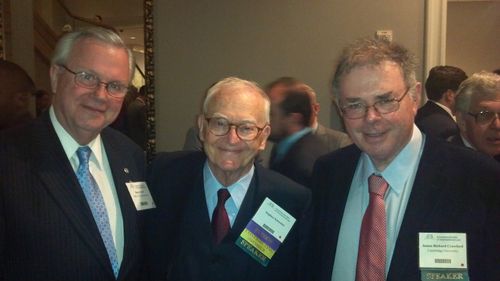 Some of the greatest personalities of international law are attending the annual meeting of the American Society of International Law this week in Washington, D.C.  Pictured here (from left to right) are Ambassador Hans Corell (former Under-Secretary-General for Legal Affairs and the Legal Counsel of the United Nations, and current Chair of the Board of Trustees of the Raoul Wallenberg Institute of Human Rights and Humanitarian Law at Lund University, Sweden), Judge Stephen M. Schwebel (who served as a judge of the International Court of Justice from 1981 to 2000, including a term as its President from 1997 to 2000), and James Crawford (Whewell Professor of International Law at the University of Cambridge, former Director of the Lauterpacht  Centre for International Law at Cambridge, and a former member of the United Nations International Law Commission, including service as the Commission's Special Rapporteur on State Responsibility).

Listed below are links to weblogs that reference Photos from the ASIL Annual Meeting: