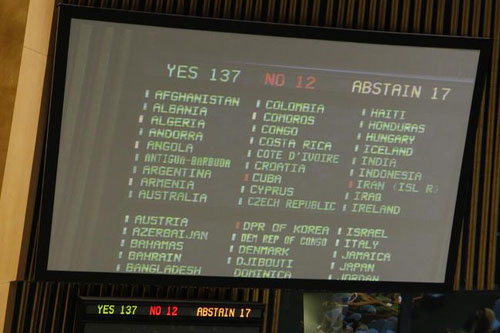 The United Nations Security Council has been unable to act on Syria because two of the permanent members -- Russia and China -- have blocked action.  But those two countries have no veto in the U.N. General Assembly, which late last night voted overwhelmingly to support an Arab League plan that strongly condemns human rights violations in Syria and that calls for Syrian President Bashar al-Assad to resign.

Click here to read more about the vote from Day-Press News.

Click here for the UN Press Release with more information about the vote.

The photo of digistal display board for the General Assembly vote is from the UN Website.  (UN Photo/Devra Berkowitz)

Listed below are links to weblogs that reference UN General Assembly Votes 137-12 to Condemn Syria: