Wrapping Up the Opening Debates at the UN General Assembly 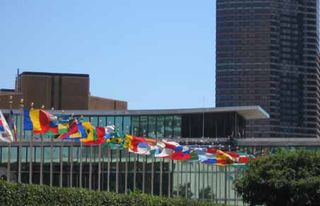 From climate change and sustainable development to the importance of multilateralism and the need for an end to impunity for war crimes and human rights, officials from United Nations Member States around the world have taken to the podium during the General Assembly’s annual general debate to voice their views about issues both global and national.

Ambassador Lucy Mungoma of Zambia told the debate that the recent political upheavals across North Africa and the Middle East have underscored the value of mediation as a way to try to resolve conflicts.  Welcoming Libyans’ ousting of the regime of Muammar al-Qadhafi earlier this year, Ms. Mungoma said she was nevertheless concerned about “new atrocities being committed against black people in that country – both the citizens and migrants from other African countries.  “We call on this august body to send a strong message that not only will it pursue perpetrators of these atrocities as vigorously as it did Qadhafi, but it undertakes to investigate all allegations thoroughly. It would be tragic if, in the euphoria of celebrating the ousting of Qadhafi, the UN turns a blind eye to atrocities still being committed.”

Angola’s External Relations Minister Georges Rebelo Chikoti stressed the value of multilateralism as a method to resolve not just conflicts but all major challenges confronting humanity.  “Angola advocates a shared commitment to find solutions at all levels for the problems we face,” he said. “My country gives priority to political and diplomatic coordination and to the strengthening of institutional relations with the organizations of the United Nations system, as well as regional and sub-regional organizations.”

For his part, Basile Ikouebe, the Foreign Minister of the Republic of Congo, used his address to call for a successful conclusion of international negotiations on a climate change agreement beyond the life of the Kyoto Protocol.  He said the global conference on the issue that will take place in Durban, South Africa, in December must lead to an international instrument that is open for countries to sign by the start of Rio+20, the sustainable development conference scheduled for Rio de Janeiro in June 2012.  Mr. Ikouebe singled out sustainable forestry management as being particularly important, noting that many poor or developing countries often lacked the necessary human, material or financial resources to adequately protect their forests stocks.

Manuel Salvador dos Ramos, Minister of Foreign Affairs and Communities of São Tomé and Principe, highlighted the Assembly debate’s theme this year – the role of mediation as a means of settling disputes.  He noted that “the widespread use of international mediation as a technique of resolving crises as a fundamental feature of peaceful conflict resolution has not always matched our expectations and produced the expected results.”  The minister said it was important for international mediators such as the UN to evolve from a peacekeeping role to one of peacebuilding. “The definition of the legal status of the mediator, the methodology of mediation and a better involvement of diplomats and experts with experience in international law appear to us as a necessary and important step that the United Nations should take in the future,” he added.

Tajikistan’s Foreign Minister Hamrokhon Zarifi voiced serious concern about the ongoing impact of climate change, especially in his own region of Central Asia.  “In Tajikistan, where about 60 per cent of all water resources of the entire Central Asia originate, in the last 30 years more than 35 per cent of glaciers disappeared,” he said. “Accelerated melting of glaciers creates additional risks for sustainable development and regional water, energy and food security.”  Mr. Zarifi called on fellow Member States to back a Tajik initiative from 2009 to establish an international fund aimed at saving glaciers.

Jigmi Y. Thinley, Prime Minister of Bhutan, said his country’s efforts to promote sustainable social and economic development were bearing fruit, with expanding forest cover in its territory and a rich biodiversity.  Ahead of Rio+20 next year, he emphasized that countries should adopt an approach that aims towards happiness or well-being – as measured against “a well-developed set of indices.” – and not just a narrow material sense of improvement.  The pursuit of happiness or well-being is “a universal value that binds the rich and the poor, the developed and the developing, and articulates the ultimate purpose of life. It is about making true societal progress in ways that are meaningful, joyful and lasting,” he said.  A failure to do so, or a continuation of the current global path, “comes at the cost of our physical, psychological and spiritual well-being. It is destroying our natural life support systems and threatening our long-term survival.”

Listed below are links to weblogs that reference Wrapping Up the Opening Debates at the UN General Assembly: