It was clear from the ASIL Teaching International Law Interest Group conference last Friday that there are lots of law professors out there doing important work with law students.  Pictured below and to the right are Professor 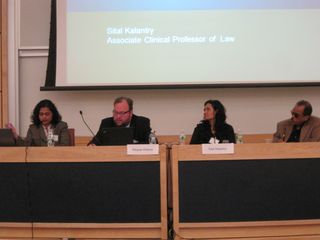 Sital Kalantry of Cornell, who spoke about her work in Columbia with a human rights clinic, Professor Sean O'Brien of Notre Dame, who discussed his work in Peru and Guatemala and, most recently representing one of the detainees at Guantanamo Bay, Professor Raquel Aldana of Pacific McGeorge, who directs a summer externship program that places students with NGOs in Guatemala, and Ambassador Robert Van Lierop, who teaches as an adjunct professor at Pace Law School and places students in externships with permanent missions at the United Nations, particularly with island nations and least developed countries.  Professor Vanessa Merton of Pace moderated the panel discussion.

Pictured below and to the left are Professor Beth Simmons of Harvard University, who spoke about her quantitative empirical work in international law and her conclusion that international human rights treaties do positively influence state behavior.  More information can be found in her award-winning book, 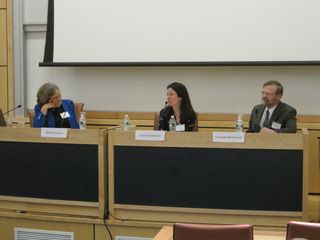 "Mobilizing for Human Rights" (Cambridge Univ. Press 2010).  To her right is Professor Laura Dickinson, of Arizona State University, who spoke about her qualitative empirical research comparing compliance with international humanitarian law between the U.S. military and private contractors.  Professor Tom McDonnell of Pace Law School was the moderator and primary organizer of the conference.

Other speakers described important historical research with respect to U.S. Foreign Relations Law (Professor Julian Ku of Hofstra), the Alien Tort Statute and the Prize Cases (Professor Tom Lee of Fordham), the Vienna Convention on Consular Relations and the Nottebohm Case (Professor Cindy Buys of Southern Illinois) and the history and use of international law by U.S. courts (Professor Jordan Paust of Houston).  That panel was moderated by Professor Mark Shulman of Pace Law School.

Professor Peggy McGuiness of St. John's described the growing readership and influence of the Opinio Juris blog and Professor Vikki Rogers of Pace Law School similarly described the importance of the Albert H. Kritzer CISG Database (Convention on the International Sale of Goods).   Professor Anthony VanDuzer of the University of Ottawa desribed an innovative NAFTA course taught jointly by law professors in Canada, the U.S., and Mexico.  Professor Sasha Greenawalt of Pace was the moderator of that panel.

Finally, the conference also featured an interesting and thoughtful debate regarding the legality of the U.S. actions in Pakistan last week, including the killing of Osama Bin Laden.  News reports of the discussion can be found here and here.

Many thanks to Professor McDonnell and the faculty and staff of Pace Law School for a well-run, interesting and informative conference!

Listed below are links to weblogs that reference Law Professors Doing Great Work: