Thursday, December 10 is International Human Rights Day.  This year's focus is on non-discrimination.  In the words of  UN High Commissioner for Human Rights Navi Pillay: "Discrimination lies at the root of many of the world's most pressing human rights problems.  No country is immune from this scourge.  Eliminating discrimination is a duty of the highest order."

Yesterday, the European Union (EU) removed another hurdle in Serbia's path to joining the EU.  In 2008, the EU had signed a Stabilisation and Association Agreement (SAA) with Serbia, a major early step in the accession process.  However, the agreement was never fully ratified largely because of objections from the Netherlands regarding Serbia's failure to hand over two war crimes suspects, Ratko Mladic and Goran Hadzic.  Mladic is accused of participating in a massacre at Srebrenica in 1995.  Hadzic likewise is accused of participating in multiple war crimes.  Both men are still at large.  Despite that fact, Serbia recently received a positive evaluation from the UN chief prosecutor, Serge Brammertz, stating that Serbia has been cooperating with the International Criminal Tribunal for Yugoslavia (ICTY).  As a result, the Netherlands withdrew its objections to the ratification and implementation of the SAA with Serbia.  The move comes just one week after EU interior ministers agreed to life visa restrictions on Serb citizens as of December 19.

As persons familiar with international intellectual property (IP) law know, the general rule is that protection for intellectual property is territorial.  As a result, if an IP owner is operating internationally, it is likely that they will need to file for IP protection in each country in which they desire protection.  While some exceptions exist, the usual requirement of multiple filings can be quite time consuming and costly and can even jeopardize protection if the owner does not file quickly enough in each place.

On Friday, the European Union (EU) took an important step toward EU-wide patent protection.  The EU's industry ministers agreed to set up a single EU patent and agreed to create a new EU patent court system, which will reduce or eliminate the need for litigation in multiple national venues and bring more uniformity to the law.  Some legal issues and other details remain to be worked out, but the agreement signals an important revitalisation of talks on an EU-wide patent system that have been stalled since 2004.

Call for Proposals: Emory Conference Will Include Teaching Transactions in an International Setting 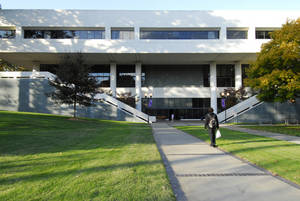 The Center for Transactional Law and Practice at Emory University School of Law in Atlanta, Georgia has issued a call for proposals for a conference being held at Emory on June 4-5, 2010.  Proposals are being accepted now through the end of January.  Conference topics include

The part on Teaching Transactions in an International Setting includes these subtopics:

ASSISTANT SECRETARY VALENZUELA: . . . [T]he Honduran congress voted yesterday not to reinstate President Manuel Zelaya to the Honduran presidency. We’re disappointed by this decision since the United States had hoped the Congress would have approved his return. And our policy since June 28 has been consistently principled, and we’ve condemned the coup d’état and have continued to accept President Zelaya as the democratically elected and legitimate leader of Honduras throughout this political crisis.

However, the decision taken by Congress, which it carried out in an open and transparent manner, was in accordance with its mandate in Article 5 of the Tegucigalpa-San Jose Accord. Both President Zelaya and Mr. Micheletti agreed to this accord on October 30. Important work remains to reestablish a democratic and constitutional order in Honduras and promote national reconciliation in the wake of the June 28 coup d’état, as the status quo remains unacceptable. Under the Tegucigalpa-San Jose Accord, the next steps in this process should be the expeditious formation of a national unity government and the establishment of a truth commission. It’s important that these steps be fulfilled to pave the way for Honduras’ return to the inter-American community of democracies. The Honduran people deserve no less and clearly signaled their desire to move forward with new leadership through their robust participation in Sunday’s elections.
The United States will continue to work with Honduran and international partners to help fulfill our overarching goal of supporting the restoration of democratic and constitutional order. We are encouraged by the strong call for national reconciliation made by President-elect Pepe Lobo, which also marks an important step in that direction.

International Day for the Abolition of Slavery

December 2 is the International Day for the Abolition of Slavery.  This day commemorates the adoption, by the United Nations General Assembly, of the UN Convention for the Suppression of the Traffic in Persons and of the Exploitation of the Prostitution of Others (resolution 317(IV) of 2 December 1949.  The National Underground Railroad Freedom Center estimates that more people are living in slavery today than at any point in history.  27 million of those persons are women and children.

Here is a Statement from U.S. Secretary of State Hillary Rodham Clinton on the International Day for the Abolition of Slavery:

Modern slavery – be it bonded labor, involuntary servitude, or sexual slavery – is a crime and cannot be tolerated in any culture, community, or country. Sadly, slavery persists around the globe, including within the United States. Every day millions of men, women, and children of all ages face forced labor and sexual exploitation, as well as brutal violence.”

The destructive effects of modern slavery have an impact on all of us. It weakens legitimate economies, breaks up families, creates violence, threatens public health and safety, and shreds the social fabric that is necessary for progress. It undermines our long-term efforts to promote peace and prosperity worldwide. And it is an affront to our values and our commitment to human rights.

On this International Day for the Abolition of Slavery, I reaffirm the commitment of the United States to end this scourge. Modern slavery is a global phenomenon and must be addressed with global partnerships between governments, non-governmental organizations, and civil society. Through new partnerships, the United States and the international community will work to rescue and serve survivors, bring traffickers to justice, and create a world where every person has the freedom and opportunity to fulfill his or her God-given potential.

The BNA International Trade Reporter (26 ITR 1652) reports that the People's Republic of China and Switzerland agreed this week to launch a Swiss-Chinese Feasibility Study to examine trade in goods, services, investment, and other areas of cooperation.  It says that in 2008, China imported $6.1 billion worth of Swiss goods and that Switzerland imported $5 billion in goods from China.

Books We Like: Stuart Deming is About to Give Us a New Edition of "The Foreign Corrupt Pactices Act and the New International Norms" 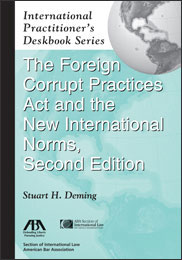 Stuart Deming is one of the country's leading experts on the Foreign Corrupt Practice Act.  He's now just about to publish a new edition of his excellent treatise on the FCPA.  Practitioners, in-house counsel, and compliance officials will benefit from this updated and expanded Second Edition, which includes:

The book is expected to be available on January 15, 2010.  (I know that will disappoint many people who may have wanted to give this as a present for the holidays, but that's how it goes friends!  You could hold off and give it as a Valentine's Day present I suppose . . . .)  OK, forgive that, but do click here for more information about the book (including how to pre-order it.  Discounts are available for members of the ABA Section of International Law.

Today (December 1) is World AIDS Day.  Perhaps in honor of the day, China has announced that it is considering lifting its 20-year-old ban that prevents foreigners from entering the country who are HIV positive or who have AIDS.  On October 30, 2009, the Obama Administration announced a related change in U.S. policy, ending HIV as a grounds of inadmissibility in U.S. immigration law.  The new rule will take effect on January 4, 2010in the United States.  There are approximately 70 countries that still prohibit persons with HIV/AIDS from entering their countries on either a short or long-term basis.

The U.N. Security Council voted this week to extend for another year and expand the arms embargo and related sanctions in the Democratic Republic of the Congo (DRC), which have been in place since 2003.   Council members voted unanimously to continue the regime of sanctions, which consists of an arms embargo against all armed groups that are not part of either the Government’s integrated army (known as the FARDC) or police units.