Ho did I not know about this beauty? Check out Papers Please: The Musical from Random Encounters.

"You will tear up every visa from a person with a beard."

"Every migrant overweight you must now interrogate."

Matter of Time by Los Lobos is a great segue into topics like the push/pull factors of migration and family reunification.

Speak softly, don't wake the babyCome and hold me once moreBefore I have to leaveBecause there's a lot of work out thereEverything will be fineAnd I'll send for you babyJust a matter of time

A nice music break with refugees from UCTV:

"Sierra Leone's Refugee All Stars have risen like a phoenix from the ashes of war and inflamed the passion of fans across the globe with their uplifting songs of hope, faith and joy. From their humble beginnings in West African refugee camps, Sierra Leone's Refugee All Stars have performed on some of the world's most prestigious stages and matured into one of Africa's top touring and recording bands."

Here's a fun one for your Labor Day weekend -- Olmeca's Browning of America.

I'm definitely going to work this song as an intro to one of my classes this week. It goes nicely with a discussion of "chain migration" -- after all, don't you think that phrase was created out of fear of the "browning of America"?

Here's a heck of a song to open your semester of immigration law with: América by Los Tigres Del Norte and featuring Calle 13:

This is followed by a shout out to various American nations: Argentina, Colombia, Ecuador, Paraguay, Brazil, Chile and Costa Rica, Salvador, Uruguay, Venezuela, Guatemala, Mexico, Cuba, and the Bahamas.

I'm the nightmare of the American dream
I am America, I am what they left
All the leftovers of what was stolen

This song is definitely making my playlist this year.

Your Playlist: Me Fui (various artists)

The story of the song Me Fui is fascinating. It was originally composed and sung by Reymar Perdomo, a migrant from Venezuela living in Perú. The original video is a street performance with Reymar leading a group of Venezuelan immigrants in song.

That video went viral. And what happened next was pretty epic.

Cool, right? THE STORY ISN'T OVER!

The title of the piece now is Me fui: El himno de los migrantes venezolanos que reunió a diferentes cantantes latinos (I left: The Anthem of Venezuelan Migrants that Brought Together Different Latino Singers).

This is clearly a song with legs. A great accompaniment to your push/pull discussion.

Check out the Venezuelan ska band Desorden Público's Los que se quedan, los que se van. It's about the Venezuelans who leave their country to pursue opportunities around the globe but who don't leave without "inmenso... vértigo."

Los que se quedan, los que se van (Those who stay, those who go)
Algún día volverán... (Someday they will come back...)

Professor Ming Hsu Chen is featured in a podcast on Race and Regulation, which is being released online July 20, 2022. 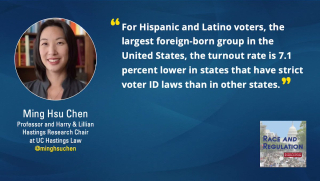 The podcast is produced by Patty McMahon and includes music by Philadelphia-based artist, Joy Ike. It builds on a Race and Regulation lecture series that includes the original talk by Chen (YouTube channel), two online symposiums organized by The Regulatory Review, and PPR’s online publications: “Racism, Regulation, and the Administrative State” and “Race and Regulation.”

Looking for a new song to add to your immigration playlist? This song isn't new, new (it's from 2017)... but it just might be new to you. Check out Jesse & Joy's Un Besito Más, which translates to One More Kiss.

It's something of a heart-breaker, focusing on U.S. citizen children who have lost a parent or parents to deportation.

In lighter news, global Korean pop (k-pop) stars BTS visited President Biden in the White House. They used the occassion to speak against anti-Asian hate and thank the president for signing the COVID-19 Hate Crimes Act that increased reporting of incidents. Their remarks:

"We were devastated by the recent surge of hate crimes including Asian American hate crimes. To put a stop on this and support the cause, we'd like to take this opportunity to voice ourselves once again. It's not wrong to be different. Equality begins when we open up and embrace all of our differences."

Video of their remarks here. More coverage of their visit from NPR here. Professor Michael A. Olivas passed on April 22, 2022. Excerpts from his obituary appear below:

Michael led an extraordinary life; he was an impactful scholar, a beloved teacher and mentor, an "accidental" historian, a radio personality, a counselor to political leaders and deans, and a beloved friend.

After his early education in Santa Fe, Michael graduated magna cum laude from Pontifical College Josephinum and received his Masters and Ph.D. at Ohio State. He then went to Georgetown University Law Center and found a passion for the law. He became a law professor at the University of Houston where he taught for 38 years. He founded the Institute of Higher Education Law and Governance and served as President of the UH Downtown Campus. He served as president of the Association of American Law Schools, elected as a member of American Law Institute and a fellow of the American Bar Foundation. He was a member of the American Educational Research Association and the National Academy of Education. He was a long time Board member of the Mexican American Legal Defense & Education Fund.

In the legal academy, he founded the Latino Law Professor Association and served as a mentor to law professors all over the country. Professor Olivas single handedly mentored and recruited dozens of Latinos into the academy. He wrote 16 books including: No Undocumented Child Left Behind: Plyler v. Doe and the Education of Undocumented School Children; Perchance to DREAM: A Political and Legal History of the DREAM Act; Suing Alma Mater: Higher Education and the Court; and, The Law and Higher Education: Cases and Material on Colleges in Court. The legacy of his scholarship is lauded in a book, Law Professor and Accidental Historian, The Scholarship of Michael A. Olivas, which collected articles by professors around the country who wrote about the brilliance and prescience of his work in immigration, education and diversity.

Funeral services are on Saturday, April 30 at the Santa Fe St. Francis Cathedral with a rosary at 11:00, the Eulogy at 11:30 and the mass celebrated at noon. A livestream will take place here. In lieu of flowers, Dr. Reyes requests donations be made to MALDEF, 634 S. Spring St. 11th Floor, Los Angeles, CA 90014 or to student scholarship funds he established at the University Houston Law Center.

Tributes from other ImmigrationProf editors (and here), and law professors reflect an outpouring of love and loss at his passing. 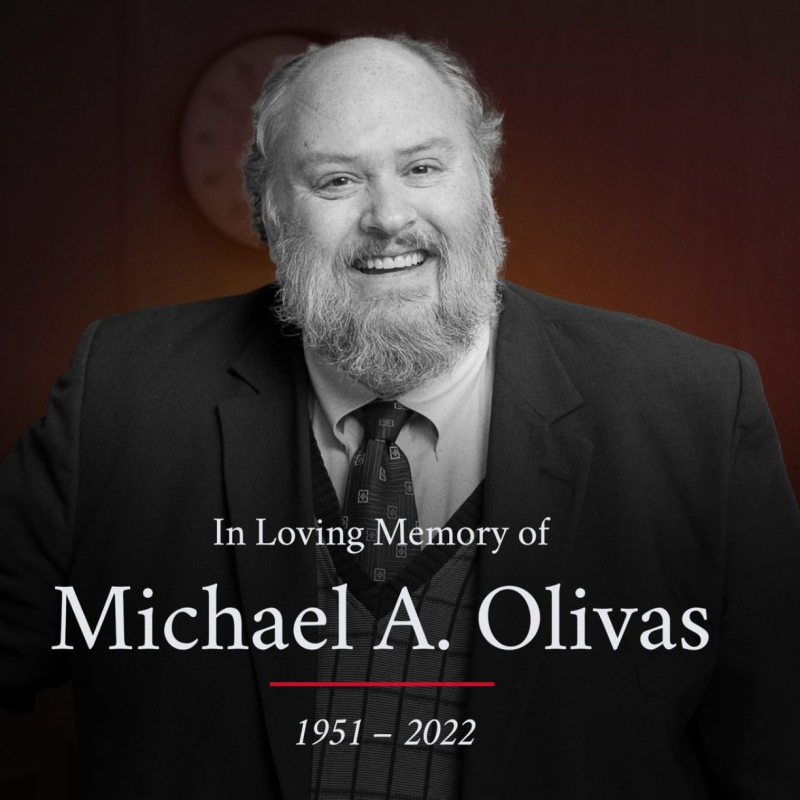 As posted two days ago, we lost a wonderful immigration colleague, Michael Olivas, a few days ago.  To celebrate his life, I wanted to post a bit about some of his loves.  For example, every Christmas holiday season, Michael would allocate a day to watching the Godfather movies.

Michael especially loved rock and roll and had a radio show on The Law of Rock N Roll.  The website had "posse postings" with nuggets like this:

"Immigration files on George Harrison and The Concert for Bangla Desh

USCIS has helpfully posted the A-file of the late George Harrison, as he was petitioning to be allowed to perform in the 1971 Concert for Bangladesh... Download PDF File"
Michael had eclectic musical interests, from Linda Ronstadt to Van Morrison to REO Speedwagon to Little Richard.  He always had some thoughts on The Boss, Bruce Springsteen, who I listen to.  I liked this story about Michael's first formative rock n roll experience:
"When [he] was 11 years old he told his parents he was going to spend the night at a friend’s house. Instead, he rode his bike to the Albuquerque Civic Auditorium and found himself electrified with the crowd by founding father of rock ‘n’ roll Little Richard."  (bold added).  And, as he put it, Little Richard changed his life.
KJ

Ukraine President Zelensky Appears in Video at the Grammys

The war in Ukraine made the Grammys last night.  Ukraine’s president Volodymyr Zelensky delivered a taped speech during the 2022 Grammys amid his country’s war with Russia.

The video introduced John Legend’s performance of “Free” as part of a special tribute to Ukraine, which is facing an humanitarian crisis with the Russian invasion. Host Trevor Noah introduced the special performance.

Don't Forget the Super Bowl Game -- Among Immigration Enforcement, Television Ads, and the Half Time Show

Bill Hing posted yesterday about the Department of Homeland Security presence at the Super Bowl.

Besides immigration enforcement activities (and the world football championship game), Super Sunday is a cultural phenomenon.  Check out the half time show with of Eminem, Snoop Dogg, Mary J. Blige, Kendrick Lamar and Dr. Dre.  Past half times have featured Lady Gaga, Jennifer Lopez, Shakira, Rolling Stones, Bruce Springsteen, and many more (including Janet Jackson in the famous "wardrobe malfunction incident).

Besides the half time show, many revelers at Super Bowl parties carefully watch the expensive television advertisements.

And, yes, there even is an immigration story here.  In 2017, with President Trump in office, Budweiser made news with a Super Bowl ad on immigration.

84 Lumber also ran an immigration ad during the 2017 Super Bowl:

The Land That I Love by Scott Ainslie explores themes of the push/pull factors leading folks to enter into the United States without authorization.

For example, the chorus cries: "If it weren’t for low wages – I’d be living there still."

Verse two tackles the crossing itself:

So, we paid the coyotes. We rode in the van.
We walked in the desert; lost in this land.
Her feet were so blistered – that she could not go on.
When I left her I kissed her. When I came back, she was gone.

You can read about Scott's journey to writing this song at this link. It's dedicated to "Grecia Cruz, who crossed into the Tohono O’odham Reservation desert and was lost June 23, 2007." Ainslie hopes that listeners will "be moved to learn more about NAFTA and the role that US trade policies and globalization play in manipulating labor on both sides of our southern border and in creating the pressing needs that are driving immigration."

LexisNexis Immigration Law brought to my attention an immigration gem -- Bob Marley's U.S. Immigration File.  the file is the subject of this article by Claudia Gardner in DanceHallMag.

"Reggae legend Bob Marley was ordered by United States Immigration officials, to leave the country or be deported, on two occasions, records dating back to 1966 have revealed. The documents, totaling 95 pages, which were requested by journalist and social justice activist Murv Glass a month after Bob died in 1981 under the Freedom of Information Act, have been online from as far back as August 2021."

Check out the article for documents in Marley's Immigration and Naturalization Service file.

This is Refugee's Christmas by Alex Boyé:

Here are some choice lyrics:

I was listening to some classic rock radio and wondered how the band Foreigner got its name.  It turns out that half the band was British and half was American.  And it turns out that one of the band's hits was about the law.

Here's a mellow number for your Saturday night -- Sade's Immigrant:

Here are the first verses: