Happy Martin Luther King Jr. Day!  It is a time for reflection on Dr. King's commitment to justice for all.  In that vein, here is a message to the community at UC Davis School of Law.

My MLK Day post from last year reminds us of Dr. King's views on immigration: 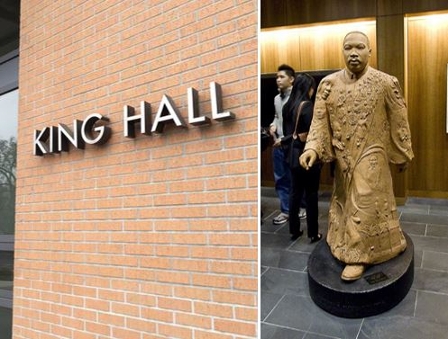 Ming Chen blogged last year blogged about Dr. King's legacy for a diverse America in the 21st century.  Jennifer Chacon has written about how Dr. King has much to teach us about immigration.

A few years ago, Obery M. Hendricks for Huffington Post wrote the following about Dr. King and immigration in words that resonated with me:

"We cannot know for sure what specific policies King would propose or support, but there are several things that we can venture with assurance: that King would condemn the demonization of undocumented immigrants, the name-calling and general characterization of them as rapists and criminals and terrorists; he would condemn the objectification of undocumented immigrants as `illegals,' a term that fails to reflect their humanity and human worth; and he would reject the narrow, legalistic nationalism of the type Clarence Jones attempts to pin on him. But first and foremost, we know that he would have the same measure of concern for the welfare and security of undocumented immigrants that he held for all people of every rank, religion, race and nationality: that they and their children should have adequate food, shelter, clothing, healthcare, education and suitable life-chances.

In other words, Martin Luther King would support any orderly and well administered immigration policy that honors and respects the integrity, wellbeing, and right to liberty, justice, equality and the pursuit of happiness for all people within our borders; and that in humane fashion considers the need for the safety of asylum for those who flee to our borders from danger, death and destruction. As for immigration policies that do not in substance honor the human personality in all these ways, one can be assured that the Martin Luther King, Jr., who said `I choose to give my life for those who have been left out' would stand against them with all of his being."