From the Booksheles: Bad Mexicans: Race, Empire, and Revolution in the Borderlands by Kelly Lytle Hernández 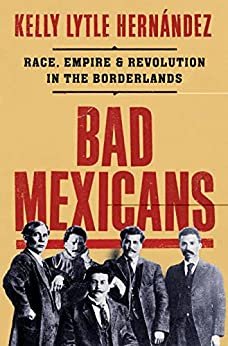 On Fresh Air on NPR:  Historian Kelly Lytle Hernández tells the story of the rebels who fled Mexico to the United States, and helped incite the 1910 Mexican Revolution that overthrew dictator Porfirio Díaz. Hernández spoke with guest interviewer Tonya Mosley about her new book, Bad Mexicans. "People who were being disparaged at that time as 'bad Mexicans' in the United States were those who organized, those who protested against the conditions of what was then known as Juan Crow, a similar form of social marginalization as Jim Crow," Hernández says.