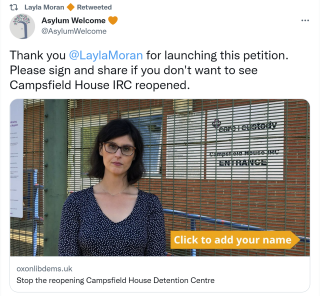 According to the press release, the new IRC, which is scheduled to open next year, "will be a secure facility and will accommodate men only."

The decision has already been met with opposition. The announced plans would actually reopen a facility called Campsfield House, that was already closed in 2018, following community protest.

Layla Moran, a Liberal Democrat MP, has created an online petition as part of a campaign against the reopening of the detention facility. The petition declares: "It is shameful that the Government will be locking up people fleeing war, persecution and torture for an indefinite length of time with no idea about when they will be released."