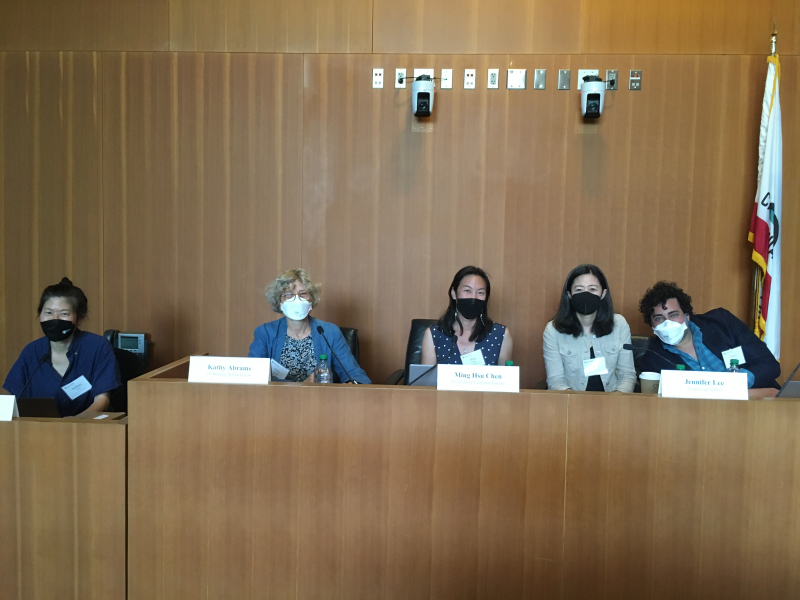 The last plenary panel of ILSTW 2022 was titled "Critical Approaches to Immigration Law."

Kathleen Kim, the panel moderator, kicked off the program by posing two questions to the panelists: (1) What is the focus and objective of your scholarship?; and (2) How does critical legal theory and related theoretical frameworks affect your work?

Daniel Morales talked about his goal of demystifying immigration law, exposing the truth about how it operates and who it benefits. He highlighted the many tools of critical theory that have helped in his research: legitimacy, power knowledge, consciousness raising, and non-reformist reform.

Kathy Abrams spoke about her relatively new focus on immigration law and her work regarding immigration activism. In terms of critical theory, she emphasized the importance of considering (1) the role of experiential storytelling, and (2) the agency of an oppressed group. She offered many concrete examples from her work regarding activists in Phoenix.

Ming Hsu Chen (our wonderful blog co-editor!) talked about her work on citizenship and the tension between seeing the benefits of formal citizenship and recognizing that for some (particularly the "racialized foreigner") inequalities continue even after formal citizenship is gained. I found particularly intriguing her observation that the U.S. recognizes the gap between the reality facing black and white Americans, and it is striving to close that gap. Yet the gap facing racialized foreigners is simply accepted.

Jen Lee talked about the radical changes that she's seen in immigration activism over the course of her career -- from a focus on achieving relief through subfederal changes to a demand to blow up the system entirely. She emphasized the importance of looking to social movements where critical approaches are generated in a "dialectical relationship between the practical and re-imagined."

Discussion after these introductory remarks flowed freely, covering the pitfalls of approaches grounded in critical theory, the role of immigration law teaching and scholarship, the rise of white power, and the rise of authoritarianism.