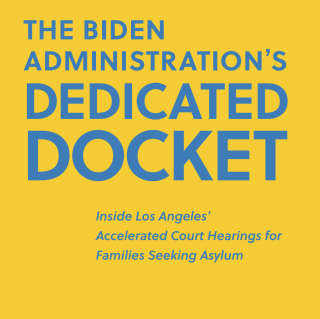 As we have posted on the blog previously, over one year ago, the Biden administration launched a so-called “Dedicated Dockets” initiative to adjudicate the cases of families seeking asylum. The Docket, also sometimes referred to a "rocket docket" because of its focus on high-speed case adjudication, is now operating in eleven cities in the United States. The new report takes an in-depth look at the operation of the Dedicated Docket in Los Angeles and highlights due process concerns raised by the program's implementation.

The report’s findings are grim: 70% of people on the Dedicated Docket in Los Angeles are unrepresented, and 99% of completed cases as of February 1, 2022 resulted in removal orders. The impact on young children is also significant: nearly half of the Docket is made up of children, and a quarter are under the age of six. The report also found that 150 children--some less than a year old--were ordered removed in absentia, most without a lawyer.