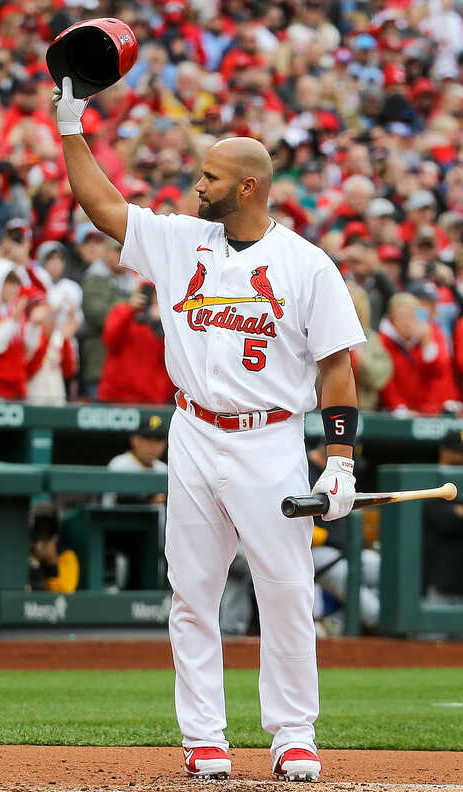 Albert Pujols, the major league baseball player with the St. Louis Cardinals, is no stranger to being immigrant of the day. Kevin highlighted him in 2007 when the Dominican-born player became a U.S. citizen, and again in 2017 when Pujols was on the verge of hitting his 600th home run (which he did and more).

Here's the thing about baseball. You've got hitters/fielders and you've got pitchers. They're different folks. Different skills. There's typically no crossover.

Pujols is, as you might guess, a hitter. He played first base for the cardinals for years. Then transitioned to becoming the team's designated hitter. That, for non-baseball folks, means he would step up and hit in lieu of the pitcher. Those 600+ home runs he's hit have many lauding him as a shoo-in for baseball's Hall of Fame once he retires.

Then came Sunday, May 15. The Cardinals were playing the Giants (S.F.). It was a blowout. In bottom of the eighth inning the Cards were ahead 15-2. The team's manager was looking around for someone to pitch the 9th so the team could avoid using a reliever. Pujols, 42, who had never before pitched, took the bait. He gave up 4 runs, but closed out the inning at 15-6.

After the game, Pujols told reporters it was: "A dream come true to say that I did it... It was fun. It wasn’t fun giving up two bombs. I think the fans had a good time. I’m sure the guys that took me deep did, too.”

You can watch his pitching here: