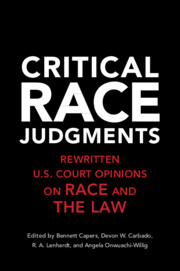 Although many of the rewritten decisions touch on immigrant communities, several focus directly on immigration law and policy, including