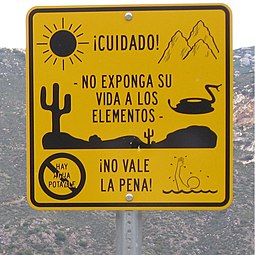 Border Patrol sign in Spanish, in California warning "Caution! Do not expose your life to the elements. It's not worth it!"

Alyssa Aquino for Law360 reports that the U.S. government has been undercounting migrant deaths along the U.S.-Mexico border, compromising the data provided to lawmakers overseeing the agency's efforts to reduce migrant deaths in the area, according to the U.S. Government Accountability Office (GAO).   Here is the report.