From the Bookshelves: Go Back to Where You Came From: And Other Helpful Recommendations on How to Become American by Wajahat Ali 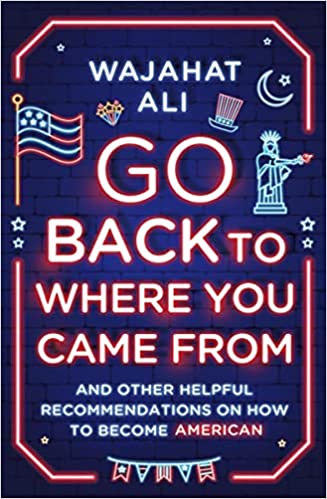 Go Back to Where You Came From: And Other Helpful Recommendations on How to Become American by Wajahat Ali

"`Go back to where you came from, you terrorist!'

This is just one of the many warm, lovely, and helpful tips that Wajahat Ali and other children of immigrants receive on a daily basis. Go back where, exactly? Fremont, California, where he grew up, but is now an unaffordable place to live? Or Pakistan, the country his parents left behind a half-century ago?

Growing up living the suburban American dream, young Wajahat devoured comic books (devoid of brown superheroes) and fielded well-intentioned advice from uncles and aunties. (“Become a doctor!”) He had turmeric stains under his fingernails, was accident-prone, suffered from OCD, and wore Husky pants, but he was as American as his neighbors, with roots all over the world. Then, while Ali was studying at University of California, Berkeley, 9/11 happened. Muslims replaced communists as America’s enemy #1, and he became an accidental spokesman and ambassador of all ordinary, unthreatening things Muslim-y.

Now a middle-aged dad, Ali has become one of the foremost and funniest public intellectuals in America. In Go Back to Where You Came From, he tackles the dangers of Islamophobia, white supremacy, and chocolate hummus, peppering personal stories with astute insights into national security, immigration, and pop culture. In this refreshingly bold, hopeful, and uproarious memoir, Ali offers indispensable lessons for cultivating a more compassionate, inclusive, and delicious America."

In reviewing the book for NPR, Jenny Bhatt writes

"Memoirs, of course, focus on a writer's personal journey. But of late, a number of those by immigrant writers of color — or by children of immigrants — have, collectively, contained some similar themes.

One prominent thread is that of being `othered,' being told in various ways that they don't fit in or belong — and should return to their place of origin. This never-ending push-and-pull of being both `native and foreign,' `citizen and suspect,' `neighbor and invader,' shapes entire lives."

Waj Ali is a graduate of UC Davis School of Law.