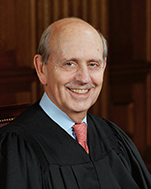 The big Supreme Court news yesterday was Justice Stephen Breyer's announcement of his decision to retire and that President Biden will have the opportunity to nominate a replacement.

In my mind, one of Justice Breyer's memorable immigration opinions is his majority opinion in Zadvydas v. Davis (2001), which reasoned that the prospect of indefinite detention of a noncitizen would raise "serious" constitutional questions.  He wrote "[b]ased on our conclusion that indefinite detention of aliens . . . .would raise serious constitutional concerns, we construe the statute to contain an implicit `reasonable time' limitation, the application of which is subject to federal-court review."  Contrary to the teachings of the plenary power doctrine, which directs the courts to defer to the immigration judgments of the President and Congress, Justice Breyer did not show special deference to the U.S. government's immigration decisions.

As immigration scholars know, Zadvydas is in tension with the Court's subsequent decision in Demore v. Kim (2003), in which Chief Justice Rehnquist was considerably more deferential to the U.S. government's immigration detention decisions.  The dueling decisions continue to be invoked in the immigrant detention cases coming before the Court, including in a pair of cases argued earlier this month.

In the next few weeks, the ImmigrationProf blog will offer a closer look at Justice Breyer's immigration opinions.  Stay tuned.