From The Bookshelves: Ha Jin's A Free Life and The Writer as Migrant 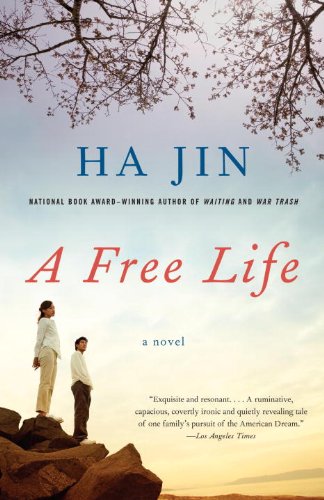 [The book] follows the Wu family — father Nan, mother Pingping, and son Taotao — as they sever their ties with China in the aftermath of the 1989 massacre at Tiananmen Square and begin a new life in the United States. As Nan takes on a number of menial jobs, eventually operating a restaurant with Pingping, he struggles to adapt to the American way of life and to hold his family together, even as he pines for a woman he loved and lost in his youth. Ha Jin's prodigious talents are in full force as he brilliantly brings to life the struggles and successes of the contemporary immigrant experience.

As a teenager during China’s Cultural Revolution, Ha Jin served as an uneducated soldier in the People’s Liberation Army. Thirty years later, a resident of the United States, he won the National Book Award for his novel Waiting, completing a trajectory that has established him as one of the most admired exemplars of world literature.

Ha Jin’s journey raises rich and fascinating questions about language, migration, and the place of literature in a rapidly globalizing world—questions that take center stage in The Writer as Migrant, his first work of nonfiction. Consisting of three interconnected essays, this book sets Ha Jin’s own work and life alongside those of other literary exiles, creating a conversation across cultures and between eras. He employs the cases of Alexander Solzhenitsyn and Chinese novelist Lin Yutang to illustrate the obligation a writer feels to the land of his birth, while Joseph Conrad and Vladimir Nabokov—who, like Ha Jin, adopted English for their writing—are enlisted to explore a migrant author’s conscious choice of a literary language. A final essay draws on V. S. Naipaul and Milan Kundera to consider the ways in which our era of perpetual change forces a migrant writer to reconceptualize the very idea of home. Throughout, Jin brings other celebrated writers into the conversation as well, including W. G. Sebald, C. P. Cavafy, and Salman Rushdie—refracting and refining the very idea of a literature of migration.

Simultaneously a reflection on a crucial theme and a fascinating glimpse at the writers who compose Ha Jin’s mental library, The Writer as Migrant is a work of passionately engaged criticism, one rooted in departures but feeling like a new arrival.

Jin is a prolific writer. You can find a list of other works at this link, including more books with immigration angles like The Boat Rocker, A Map of Betrayal, and A Good Fall (my first read of his).

I'm starting to think this should've been styled as "immigrant of the day" instead of "from the bookshelves"! In which case, Ha Jin (pen name of Xuefei Jin) was born in China. He came to the United States to study and, while here, the events of Tiananmen Square happened, and Jin never returned. Instead, Jin became a professor of creative writing, first at Emory and then Boston U, where he still works today. He became a U.S. citizen in 1997, and we are darn lucky to have him.