From The Bookshelves: The Rule of Law in the United States: An Unfinished Project of Black Liberation by Paul Gowder 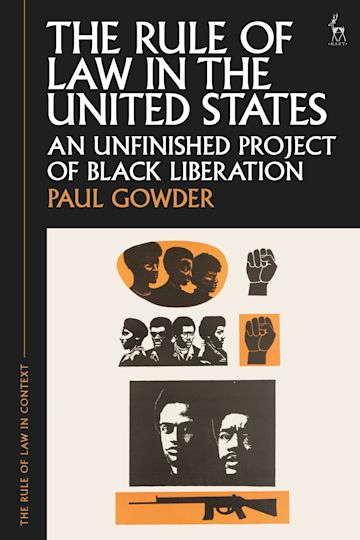 The Rule of Law in the United States: An Unfinished Project of Black Liberation is a just-released, open-access book authored by Paul Gowder (Northwestern).

Check out Chapter 6. The Gavel and the Fist: The Problem of Sovereignty and Borders. Here's a sample:

The origins of our immigration law lie in the Chinese Exclusion Act era, which wrote open racism into federal law; its plenary power doctrine is shared with the covertly colonial relationship between the federal government and Native American Nations, and the openly colonial Insular Cases – both covering groups who have been represented as quasi-foreigners with subordinate legal rights. In many respects its formal characteristics are a reprise (albeit at a lower key) of many of the ways in which slavery and Jim Crow warped the American legal system. Immigration, like slavery, has been characterised by the rhetorical and legal creation of categories of legal non-subjects or outlaws who are excluded from the ordinary protections of due process and subject to the whims of both specially empowered public officials as well as private persons. And much as in the time of slavery, immigration law today creates perennial conflicts over federalism, as states struggle to be more or less protective of migrants than the federal government would permit. Slavery even raised the legal issue most characteristic of immigration law, deportation itself, as some contended that free Black Americans were noncitizens who could be forcibly removed from US territory or from specific states, or at least encouraged to leave. In recent years the notion of ‘self-deportation’ has been popular on the political right in the form of the open desire to make conditions so unpleasant for immigrants that they leave of their own ‘free will’. But this is a longstanding US policy that was also applied to Black Americans and to Native Americans.

Much like the Fugitive Slave Act, in immigration too the existence of legal caste has compromised the procedural protections available to those whom the law targets as well as those adjacent; the immigration enforcement regime thereby poses a threat to the protections of law for citizens and others outside the immediate immigration context. The organisations tasked with immigration enforcement, like all bureaucracies, have a tendency to grow and to propagate the distinctive logic of their operation – in the case of the immigration agencies, a lack of internal legal culture and habit of ignoring individual rights. The willingness of political leaders, courts, and ordinary citizens to ignore the lawless behaviour of the immigration enforcement agencies has a corrupting effect on their collective capacity to check the lawless behaviour of other public officials. And the boundary between the categories of ‘citizen’ and ‘non-citizen’ is sufficiently porous, both conceptually and in practice, that citizens cannot safely assume that the misconduct of these officials will not be directed against them. Such is the argument of this chapter.