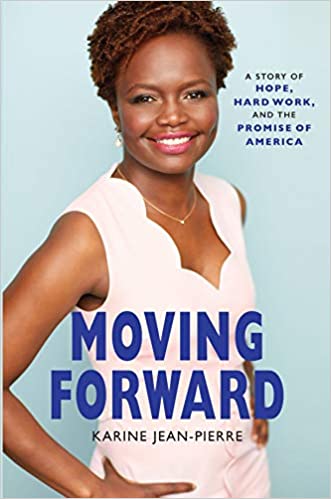 Our Immigrant of the Day is Karine Jean-Pierre, who made history in May by becoming the first openly gay woman – and only the second Black woman – to lead a White House press briefing.

FRANCE24 interviewed Deputy Press Secretary Karine Jean-Pierre (44), who often briefs reporters aboard Air Force One and occasionally takes the podium in the briefing room as part of the all-female senior communications team at the White House.

Jean-Pierre was born in Fort-de-France, Martinique, where her Haitian-born parents landed after fleeing the dictatorship of Jean-Claude Duvalier. She spent several years in France as a child before her family settled in the United States, where she was raised in Queens, New York. The daughter of a cab driver and a home healthcare aide, Jean-Pierre has worked on many Democratic campaigns and in grassroots activism.

In her memoir Moving Forward: A Story of Hope, Hard Work, and the Promise of America (2019), she discusses her struggles in early adulthood: She is a survivor of sexual abuse, has suffered depression and attempted suicide. She also chronicles her path from local New York politics to working in the Obama White House.