Throwback Thursday: Detain and Punish: Haitian Refugees and the Rise of the World's Largest Immigration Detention System by Carl Lindskoog 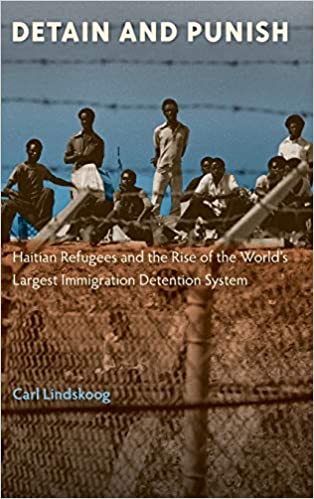 This week has been dominated by headlines regarding Haitian migrants at the Southern border. See Kevin's excellent coverage here, here, here, and here.

This current crisis must be viewed through the lens of our nation's historical treatment of Haitian asylum seekers. And on that front, I can think of no better Throwback Thursday recommendation than Carl Lindskoog's 2018 book Detain and Punish: Haitian Refugees and the Rise of the World's Largest Immigration Detention System.

If you're unfamiliar with it, here's the pitch:

Immigrants make up the largest proportion of federal prisoners in the United States, incarcerated in a vast network of more than two hundred detention facilities. This book investigates when detention became a centerpiece of U.S. immigration policy, revealing why the practice was reinstituted in 1981 after being halted for several decades and how the system expanded to become the world’s largest immigration detention regime. From the Krome Detention Center in Miami to Guantanamo Bay, Cuba, and to jails and prisons across the country, Haitians have been at the center of the story of immigration detention. When an influx of Haitian migrants and asylum seekers came to the U.S. in the 1970s, the government responded with exclusionary policies and detention, setting a precedent for future waves of immigrants. Carl Lindskoog details the discrimination Haitian refugees faced and how their resistance to this treatment―in the form of legal action and activism―prompted the government to reinforce its detention program and create an even larger system of facilities. Drawing on extensive archival research, including government documents, advocacy group archives, and periodicals, Lindskoog provides the first in-depth history of Haitians and immigration detention in the United States. Lindskoog asserts that systems designed for Haitian refugees laid the groundwork for the way immigrants to America are treated today. Detain and Punish provides essential historical context for the challenges faced by today’s immigrant groups, which are some of the most critical issues of our time.