From The Bookshelves: War on the Border by Jeff Guinn 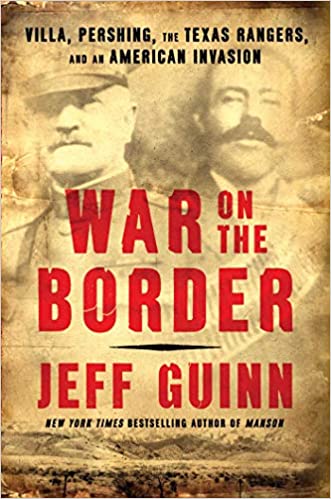 Looking for a nonfiction historical read to keep you company poolside? Consider Jeff Guinn's War on the Border: Villa, Pershing, the Texas Rangers, and an American Invasion. Here's the pitch:

Jeff Guinn, chronicler of the Southwestern US and of American undesirables (Bonnie and Clyde, Charles Manson, Jim Jones) tells the riveting story of Pancho Villa’s bloody raid on a small US border town that sparked a violent conflict with the US. The “Punitive Expedition” was launched in retaliation under Pershing’s command and brought together the Army, National Guard, and the Texas Rangers—who were little more than organized vigilantes with a profound dislike of Mexicans on both sides of the border. Opposing this motley military brigade was Villa, a guerrilla fighter who commanded an ever-changing force of conscripts in northern Mexico.

The American expedition was the last action by the legendary African-American “Buffalo Soldiers.” It was also the first time the Army used automobiles and trucks, which were of limited value in Mexico, a country with no paved roads or gas stations. Curtiss Jenny airplanes did reconnaissance, another first. One era of warfare was coming to a close as another was beginning. But despite some bloody encounters, the Punitive Expedition eventually withdrew without capturing Villa.

Today Anglos and Latinos in Columbus, New Mexico, where Villa’s raid took place, commemorate those events, but with differing emotions. And although the bloodshed has ended, the US-Mexico border remains as vexed and volatile an issue as ever.

As WaPo summarizes in their book review: "Guinn argues that this period of violence solidified a framework of relations between the two nations that endures today. Many in Mexico continue to view the United States as a hypocritical, imperialistic bully, while many Americans see Mexico as a security threat rooted in gang violence and undocumented border crossings."