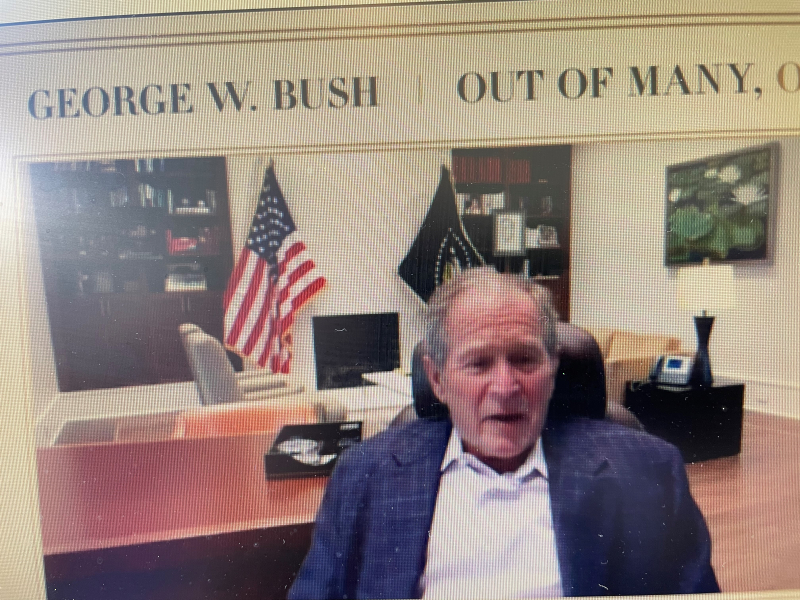 As previously announced on this blog, the George W. Bush Presidential Center co-sponsored a virtual program on "Immigrants and the American Future: A Conversation with President George W. Bush, Dr. Russell Moore, and Yuval Levin."

The George W. Bush Institute, National Immigration Forum, and the Ethics & Religious Liberty Commission of the Southern Baptist Convention co-sponsored the conversation with President George W. Bush on his book, Out of Many, One: Portraits of America’s Immigrants, a powerful collection of 43 portraits painted by President Bush and accompanying stories that exemplify the promise of America and our proud history as a nation of immigrants.

President Bush was joined by Dr. Russell Moore, President of the Ethics & Religious Liberty Commission of the Southern Baptist Convention, and Yuval Levin, Director of Social, Cultural, and Constitutional Studies at the American Enterprise Institute. Together they discussed the value of immigrants to our nation and the faith and culture of our increasingly diverse country. The conversation will touched on the stories in Out of Many, One: Portraits of America's Immigrants, including Levin’s personal experience as an immigrant.

The event opened with remarks from Holly Kuzmich, Executive Director of the George W. Bush Institute and Ali Noorani, President and Chief Executive Officer of the National Immigration Forum.