From the Bookshelves: The Accidental History of the U.S. Immigration Courts War, Fear, and the Roots of Dysfunction by Alison Peck 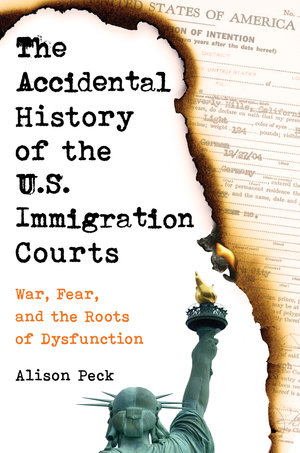 The Accidental History of the U.S. Immigration Courts War, Fear, and the Roots of Dysfunction by Alison Peck (University of California Press, May 2021)

During the Trump administration, the immigration courts were decried as more politicized enforcement weapon than impartial tribunal. Yet few people are aware of a fundamental flaw in the system that has long pre-dated that administration: The immigration courts are not really “courts” at all but an office of the Department of Justice—the nation’s law enforcement agency.

This original and surprising diagnosis shows how paranoia sparked by World War II and the War on Terror drove the structure of the immigration courts. Focusing on previously unstudied decisions in the Roosevelt and Bush administrations, the narrative laid out in this book divulges both the human tragedy of our current immigration court system and the human crises that led to its creation. Moving the reader from understanding to action, Alison Peck offers a lens through which to evaluate contemporary bills and proposals to reform our immigration court system. Peck provides an accessible legal analysis of recent events to make the case for independent immigration courts, proposing that the courts be moved into an independent, Article I court system. As long as the immigration courts remain under the authority of the attorney general, the administration of immigration justice will remain a game of political football—with people’s very lives on the line.