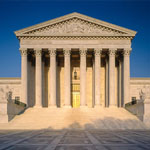 Today, the Supreme Court in Niz-Chavez v. Garland held that a notice to appear sufficient to trigger the “stop-time” rule for measuring the time for cancellation of removal relief must be a single document containing all the information about the noncitizen's removal hearing.  The case involved the application of the Court's 2018 decision in Pereira v. Sessions, which held that A putative notice to appear that fails to designate the specific time or place of the noncitizen’s removal proceedings is not a notice to appear under the statute , and does not trigger the "stop-time rule."

As described by the syllabus to the opinion, the majority held that "[a] notice to appear sufficient to trigger the . . . stop-time rule is a single document containing all the information about an individual’s removal hearing . . . . "

In recapping he argument, Jayesh Rathod as spot on in predicting the outcome::

"By the end of the hour, four justices – Breyer, Gorsuch, Kagan and Sotomayor – had openly expressed skepticism about the government’s reading of the statute. Roberts and Barrett revealed less, but seemed persuaded that the government could sidestep this entire issue by modifying some agency practices. Although few of the justices invoked Pereira as controlling precedent, the court’s decision there – coupled with its seeming reluctance to indulge bureaucratic inefficiencies – could very well lead to another lopsided decision in favor of noncitizens."

Here is the SCOTUSBlog collection of materials and commentary on the case.

We will post analysis of the Court's decision as it becomes available.

UPDATE (April 30):  The title of Mark Joseph Stern's article in Slate ("Neil Gorsuch’s Persnickety Libertarianism Gave Immigrants a Win at the Supreme Court") offers a good hint of his analysis of the Court's decision in Niz-Chavez.  The punch line:

"On Thursday, Agusto Niz-Chavez received the benefit of the written word. He can now petition for the ability to remain in the United States with his three children, all American citizens. The decision may not be an earth-shaking victory for immigrants’ rights. But it vindicates a principle that has been badly damaged in recent years: Immigration officials can’t cheat non-citizens out of a right guaranteed to them by the plain language of the law."