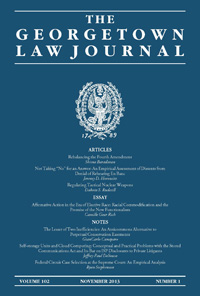 Ann Marimow for the  Washington Post reports on what appears to be an immigration first.

Agnes Lee is the new editor-in-chief of the Georgetown Law Journal.  A beneficiary of the Deferred Action for Childhood Arrivals (DACA) policy, she is "outspoken" about her immigration status status and using her new post at the helm of  Georgetown Law Journal "to broaden and diversify the ranks of authors and student leaders." According to Marimow, "Lee . .  is believed to be the first openly undocumented student elected editor in chief of the flagship journal at a top U.S. law school."  Actually, Lee now has DACA status and now is not undocumented.

Lee was born in South Korea, arrived in the United States at age 2, and grew up in Los Angeles.  She worked at her mother’s Korean fried chicken restaurant in Los Angeles.  She regularly renewed her DACA status but worried about the threat of removal if President Trump successfully rescinded DACA.