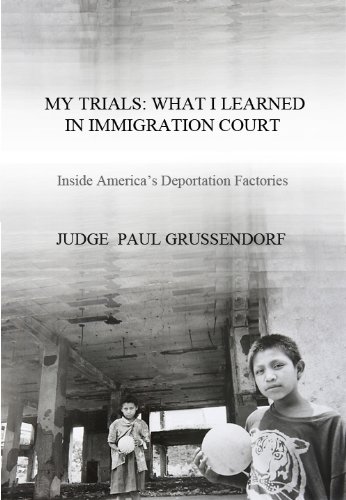 One of my sabbatical goals has been to read an immigration book a week. Six months in, I've finally read a single book. Lucky for me, I picked up My Trials: Inside America's Deportation Factories by former CARCEN attorney, immigration clinic director, refugee officer, and immigration judge Paul Grussendorf. Y'all, this book did not disappoint.

The Forward to the book notes that it is self-published and intentionally so. Grussendorf observes that publishing with a traditional outlet would have required taking out "political content" and turning the work into more of a "scholarly treatise." Grussendorf wasn't having that, and we are so lucky he made the choice he did.

The book is so spicy you will fly through its pages.

Consider Grussendorf's take on government attorneys, whom he berates for "taking outrageous positions that are absurd in their posture, except that the results are devastating for the poor immigrants[.]" (p. 60) He talks about his struggle with "the kinds of abuses that were taking place in my courtroom by government lawyers, including a general lack of respect for, and a calculated attempt to demean and degrade the individuals who were on trial[.]" (p. 149). He saw too many "young, overzealous attack-dogs". (p. 149) In another passage, Grussendorf talked about the failure to exercise reasonable prosecutorial discretion, noting: "I never understood whether the responsible official was mean spirited, a moral coward, or just afraid of being perceived by her peers as soft on criminals." (p. 222)

Grussendorf also calls out "abusive" IJs (p. 60), arguing that "incredibly inept, culturally insensitive, and actually harmful judges should not be allowed to 'torture' people (an apt and legally correct use of the term) in their courtrooms, with no oversight or censor from management." (p. 77-78). Among his examples: a former DOJ attorney who "had made the lives of others around him, including his superiors, so miserable that he had been promoted to the IJ slot to get him out of the office." (p. 72) Another: A female IJ who denied asylum to a woman subject to multiple rapes on the their that her abuse "had not been for political motives, but simply because men are apt to act like beasts." (p. 76)

Law professors do not escape Grussendorf's sharp takes. He calls out GW's faculty of "spineless worms" (p. 103) for working to close the school's immigration clinic. (That chapter alone was priceless.)

And don't put the book down before you reach the chapter about IJs frequenting a Guam strip club staffed by undocumented Asian strippers. (p. 173-4).

Beyond these gems, Grussendorf offers story after story of immigrants being ground up and spit out by the immigration system. It's a genuinely compelling, heartfelt read that I cannot recommend enough.

Thanks for this review, Kevin, this has been a project many years in the making. I'm happy to make the book available at bulk rates for any immigration class or clinic and happy to respond to interview requests!