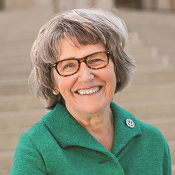 I had the pleasure of talking today with Sister Simone Campbell about immigration reform.  (the video above is her speech at the Democratic National Convention in 2012.).  Sister Simone has served as Executive Director of NETWORK since 2004. She also is an alumna of UC Davis School of Law.  She has extensive experience in public policy and advocacy for systemic change. In Washington, she lobbies on issues of economic justice, immigration reform, and healthcare. Around the country, she is a noted speaker and educator on these public policy issues.

Sister Simone is optimistic on immigration reform, perhaps in incremental form.  The Dream Plus Act, sponsored by Senators Dick Durbin (D-Ill) and Lindsey Graham (R-SC) may move quickly to the Senate.  A bill that would provide immigration benefits to farm labor also may gain traction.   By just about everyone's estimation, the comprehensive U.S. Citizenship Act of 2021 faces stiffer odds.