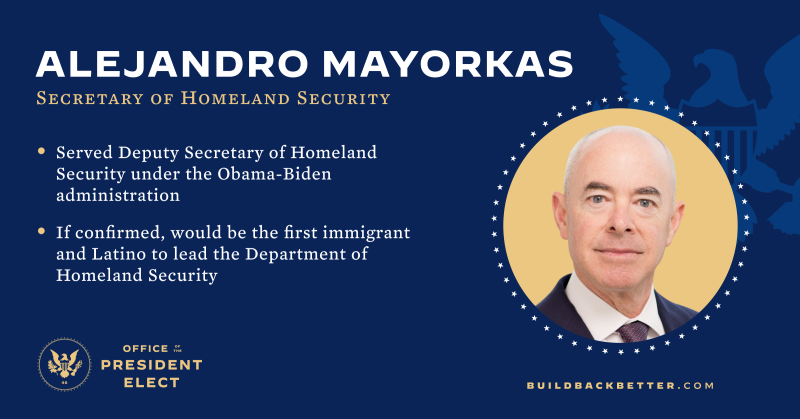 Alejandro Majorkas, the nominee for Department of Homeland Security (DHS) Secretary, testified before the Senate Homeland Security and Governmental Affairs Committee in his confirmation hearings. He has worked in the government for twenty years and was previously Deputy DHS Secretary and head of the US Citizenship and Immigration Services (USCIS) in the Obama administration. His family is Jewish and were refugees of the Nazis; Mayorkas was born in Cuba and raised in Southern California.

Immigration-related topics for questioning included immigration enforcement, specifically how Mayorkas would approach the U.S.-Mexico border and whether immigrants seeking economic opportunity were eligible for asylum. He was asked about Deferred Action for Childhood Arrivals, Central American asylum seekers, and border closures during COVID-19. Questions were asked about his position on funding for the Immigration and Customs Enforcement (ICE) agency, which has been a target of progressives, and about declining agency morale. Some senators raised concerns about his handling of a visa program from wealthy investors and about his work on cybersecurity, areas of focus for Mayorkas when he previously served in DHS as head of USCIS and deputy to DHS Secretary Jeh Johnson.

According to the Washington Post, many senators hoped for a fast-tracked confirmation in order to maintain national security after the capitol siege and several raised or asked questions about it. The Federal Emergency Management Agency is within the DHS. Mayorkas testified that he felt the insurrection was "horrifying" and voweed that the terror inflicted on Senators and staffers "will not happen again."

Democrats have enough votes that his confirmation is likely. But Senator Josh Hawley (R-Mo), who sits on the homeland secrutiy committee, sought to block the confirmation because he was disatisfied with Mayorkas' answers. (Mayorkas failed to receive Republican support during his confrimation for DHS Deputy Secretary in 2013).

DHS has gone without a Senate-confirmed leader for nearly two years.