Raising the bar to US citizenship with a new test

In keeping with a longer running trend of raising bars to citizenship, the U.S. Citizenship and Immigration Services has unveiled its new test for naturalized citizenship. The test is longer and harder. It also contains several  questions that take political stances on matters that speak to the national identity and pique skepticism about the function of the tests (a subject written about by Stella Burch Elias in 2016).

For example, the new question "Who does a U.S. Senator represent?” presents as two options: "all people of the state" and "all citizens of the state." The correct answer used to be all "people" of the state, on the new test the preferred answer is “citizens" in the state." The shift parallels the effort from the Trump Administration to shrink the boundaries of the political community by excluding immigrants from the decennial census count that determines the number of seats available to each state in Congress (a topic I've researched and am writing about for a forthcoming NYU Law Symposium on Voting and Representation).  That effort is now being reviewed in the Supreme Court. There are also questions about the Tenth Amendment referencing states' rights and the Vietnam War's goal of eradicating communism.

You can try out sample questions from the new citizenship exam here. 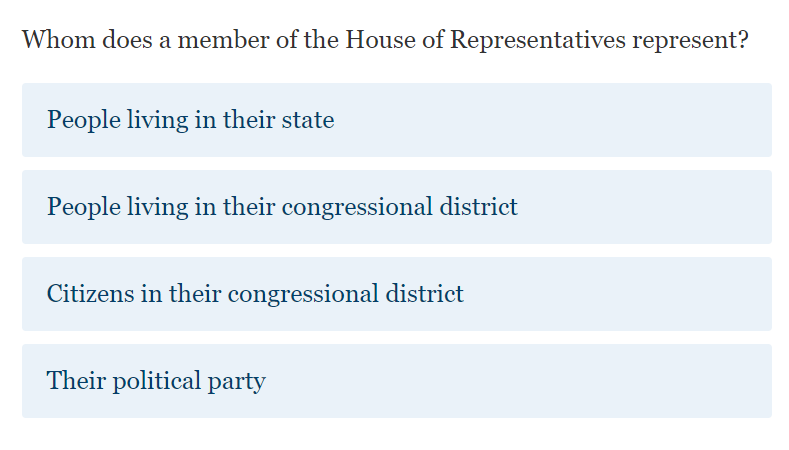