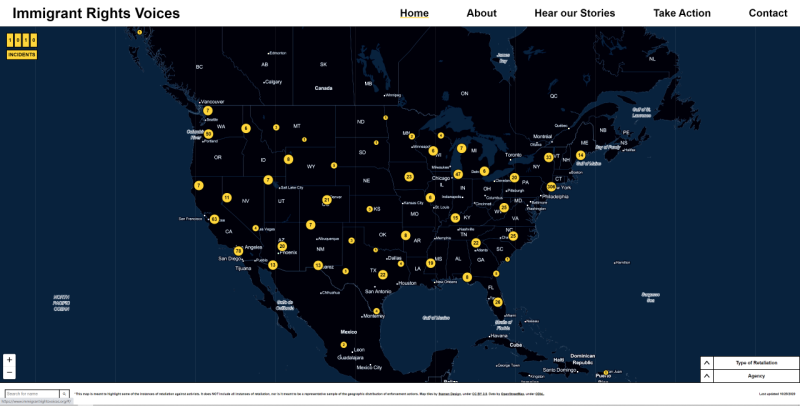 The New York University School of Law Immigrant Rights Clinic (IRC) and New Sanctuary Coalition (NSC) announce the launch of  Immigrant Rights Voices website and the #ProtectImmigrantVoices campaign.  The website features an interactive map documenting over a thousand instances of retaliation against immigrant rights defenders by numerous U.S. government agencies and highlights the personal accounts of immigrant rights leaders who have been arrested, jailed, surveilled, and deported for their activism. It claims that, by abusing its immense power in an attempt to stamp out dissenting voices in immigrant communities, the government is trampling on the First Amendment right to speak truth to power. In response, IRC and NSC, in collaboration with numerous organizations and individuals directly impacted by retaliation, have launched the #ProtectImmigrantVoice campaign to highlight this pattern of retaliation and demand an end to these practices.

Timed to launch on the eve of the election, the #ProtectImmigrantVoices campaign makes the case for why it is more critical than ever to protect the rights of immigrants to speak freely and organize collectively. By exposing the government’s playbook of threats, retaliation, and intimidation, and highlighting the continued resistance and resilience of those targeted, we send a clear message: immigrant rights activists and immigrant communities will not be silenced.  Learn more at immigrantrightsvoices.org.