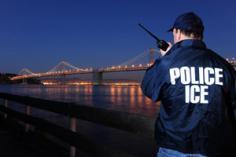 Stella M. Chavez for KERA report that the Southern Poverty Law Center and Freedom for Immigrants have filed a complaint alleging that Immigration and Customs Enforcement officers, guards and the facility administrator “tortured Cameroonian individuals in attempts to coerce them to sign immigration documents through pressure, threats and — in several cases — excessive use of force, including physical abuse and pepper spray, resulting in severe injury.”

Details include detainees’ fingerprints being forcibly taken while handcuffed and the fingers of a man being broken. The men allege that some of these incidents were filmed by guards on site.  Sofia Casini, Director of Advocacy Strategies at Freedom for Immigrants, said the lives of these migrants are at stake if they return to their native Cameroon where there has been ongoing fighting between the French-speaking government and English-speaking minority.  Casini said most of the migrants being detained came across the U.S. border asking for asylum.

Click the link above for the full complaint filed by the Southern Poverty Law Center and Freedom for Immigrants.