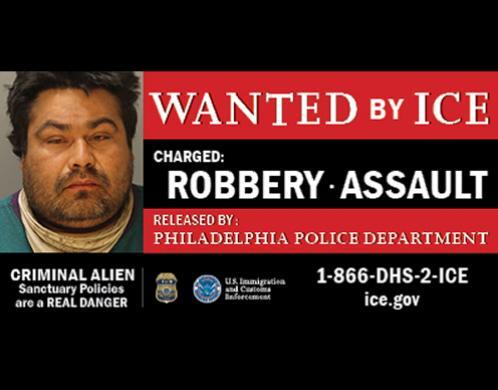 It is not long until the election. In a public relations measure that sounds like the brainchild of former Maricopa County Sheriff Joe Arpaio,  Tal Axelrod for the Hill reports on the U.S. Immigration and Customs Enforcement's announcement that:

"it is launching a billboard campaign in Pennsylvania highlighting immigrants who have been labeled `at-large immigration violators.'

The unprecedented campaign, taking place in one of the nation’s most hotly contested swing states, will highlight immigrants who were released by local law enforcement under so-called sanctuary policies and ICE says, `may pose a public safety threat.'

ICE is basing its campaign on the claim that local agencies `fail to honor immigration detainers' it issues and release “serious criminal offenders,” in turn hindering its efforts to protect the public."

The ICE announcement reads as follows:

"U.S. Immigration and Customs Enforcement (ICE) launched a billboard campaign today in Pennsylvania to educate the public about the dangers of non-cooperation policies. The billboards feature at-large immigration violators who may pose a public safety threat. These individuals were previously arrested or convicted of crimes in the U.S., but were released into the community instead of being transferred to ICE custody pursuant to an immigration detainer.

“Too often sanctuary policies limiting cooperation with ICE result in significant public safety concerns,” said Senior Official Performing the Duties of the Director Tony H. Pham. “ICE will continue to enforce immigration laws set forth by Congress through the efforts of the men and women of ICE to remove criminal aliens and making our communities safer.”

The billboards are located at or near:

ICE lodges immigration detainers on individuals who have been arrested on local criminal charges and who are suspected of being removable, so that ICE can take custody of that person when he or she is released from local custody. When law enforcement agencies fail to honor immigration detainers and release serious criminal offenders onto the streets, it undermines ICE’s ability to protect public safety and carry out its mission.

Han Soo Lee, 61, a South Korean national illegally present in the U.S. Lee was arrested by the Philadelphia Police Department Aug. 11 for aggravated assault, simple assault, possessing instrument of crime, recklessly endangering. ICE lodged a detainer with Curran-Fromhold Detention Center, but due to Philadelphia sanctuary laws, detainers have not been honored, and the subject was released to the community.

Lauro Peralta-Veles, 51, an Ecuadorian national illegally present in the U.S. Peralta-Veles was arrested by the Pittsburgh Police Department June 20 for aggravated  assault, public intoxication, resisting arrest, and disorderly conduct. ICE lodged a detainer, with the Allegheny County Jail, but due to Allegheny County sanctuary laws, detainers have not been honored, and the subject was released to the community.

Non-cooperation policies result in preventable crimes of violence taking place in our communities when dangerous criminal aliens are released to the streets to reoffend. In December 2018, the Pittsburgh Police Department arrested Harvinder Singh, an Indian national illegally present in the U.S., for harassment. ICE officers lodged a detainer with the Allegheny County Jail, but it was not honored, and the subject was released from local custody without notification to ICE. This marked the second time a detainer on Singh wasn’t honored. He was previously arrested in 2017 for driving under the influence in Georgia, subsequently convicted, and the Columbus Police Department released him with an active detainer in place.  In February 2020, the New York Police Department (NYPD) arrested and charged him with murder and criminal possession of a weapon. ICE lodged a detainer with the NYPD – Queens Central Booking and is currently monitoring the disposition of his criminal case.

The public should call ICE at 866-DHS-2-ICE (866-347-2423) if they have information to report about the whereabouts of an individual featured on one of the billboards."