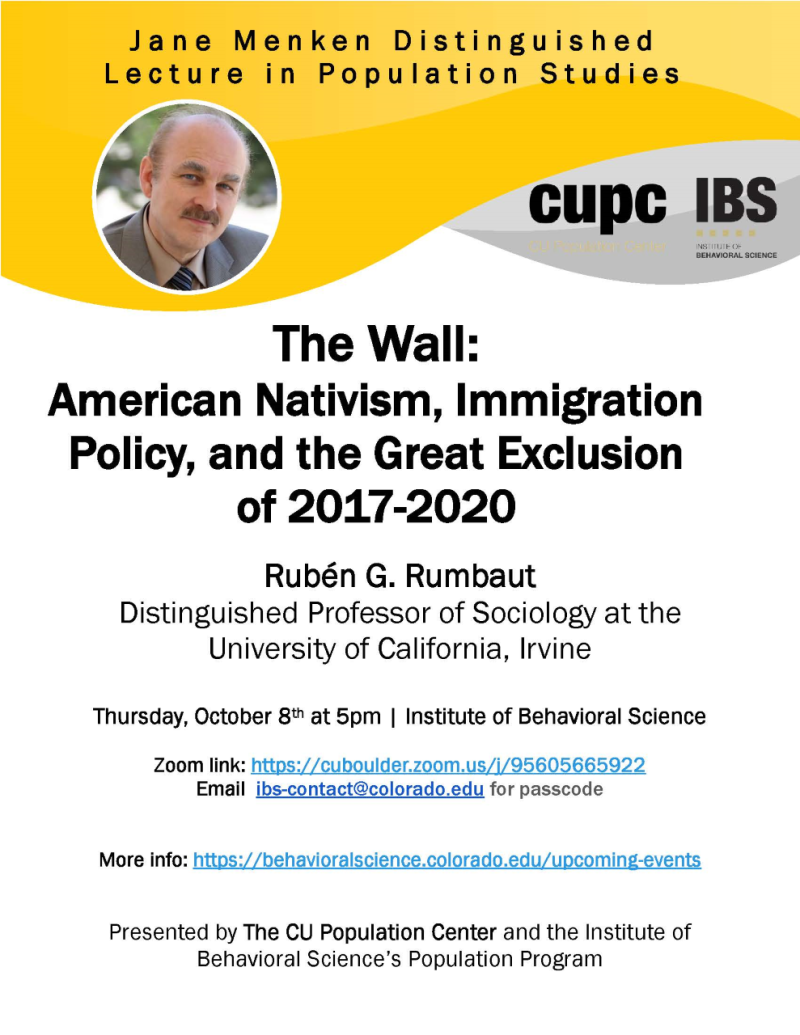 The CUPC Jane Menken Distinguished Lecture in Population Studies is a biennial event which recognizes the enormous contribution that Dr. Jane Menken has made to the study of Population and to University of Colorado Boulder with a lecture by a distinguished demographer.

Title: The Wall: American Nativism, Immigration Policy, and the Great Exclusion of 2017-2020

Abstract:  Much of American history can be seen as a dialectic of processes of inclusion and exclusion, and in extreme cases of expulsions and forced removals. An iconic feature of the American story has been the remarkable capacity of this self-professed “Nation of Immigrants” to absorb, like a giant global sponge, tens of millions of newcomers from all classes, cultures and countries. But this phenomenal accomplishment has historically coexisted with a seamier side of the process of nation building, expansion and design. Since colonial times nativist ideologies have framed "foreigners" as threats, demagogues have fanned moral panics about immigrants, and state policies have sought to control the inflow of newcomers or to keep them out of the nation altogether.

This talk will focus on the Great Exclusion of the period spanning the Trump Administration, 2017-2020. A rarity in U.S. history, candidate Trump ran on immigration explicitly as a nativist candidate and won the presidency in the electoral college. “The wall” remains the signature part of his message, although few miles of new wall have been built along the southern border to date (and not a penny has been paid by Mexico), and no legislation has been passed by Congress. Nonetheless, the Trump administration has radically restricted immigration to the United States through hundreds of administrative actions and executive orders, drastically reducing legal family-based immigration, cutting refugee admission to its lowest level since the 1980 Refugee Act was passed, effectively ending asylum in the United States, and causing enormous backlogs in citizenship applications that are preventing eligible immigrants from becoming naturalized. These restrictive policy actions have been further extended and amplified by the administration within the context of the 2020 covid-19 pandemic, adding up to “the most sweeping ban on immigration in American history.”

Bio: Rubén G. Rumbaut is Distinguished Professor of Sociology at the University of California, Irvine. Over the past few decades he has directed seminal empirical studies of immigrants and refugees in the U.S., from the principal studies of the resettlement of refugees from Vietnam, Laos and Cambodia in the 1980s; to the landmark "Children of Immigrants Longitudinal Study" (with Alejandro Portes) since 1991; the "Immigration and Intergenerational Mobility in Metropolitan Los Angeles" study in the 2000s; and "The Second Generation in Middle Adulthood" in the 2010s (with Cynthia Feliciano). Among numerous publications, he is the coauthor of Immigrant America: A Portrait, and Legacies: The Story of the Immigrant Second Generation, which won the American Sociological Association’s top award for Distinguished Scholarship, and the Thomas and Znaniecki Award for best book in the immigration field. A recipient of the Distinguished Career Award from the ASA’s International Migration Section, he is a fellow of the National Academy of Education and the American Academy of Arts and Sciences. [UCI website: http://www.faculty.uci.edu/profile.cfm?faculty_id=4999]