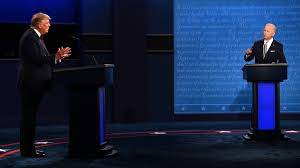 Tonight marked the first presidential debate between President Trump and Vice President Biden. Many experts had predicted that immigration would be central in any presidential debate. To be sure, where the candidates stand on immigration issues has been a topic of considerable public concern. Although immigration has been an important issue over the course of the Trump presidency, the moderator did not pose any questions during the debate on crucial topics of federal immigration policy such as detention and deportation. Across the name calling in the chaotic debate, President Trump refused to categorically denounce white supremacy. He also repeatedly blamed China for the COVID-19 pandemic, referring to it as the "China Plauge." Any future debates should engage seriously in the crucial immigration issues at stake in the election, including legalization, the growing immigration court backlog, and border enforcement.